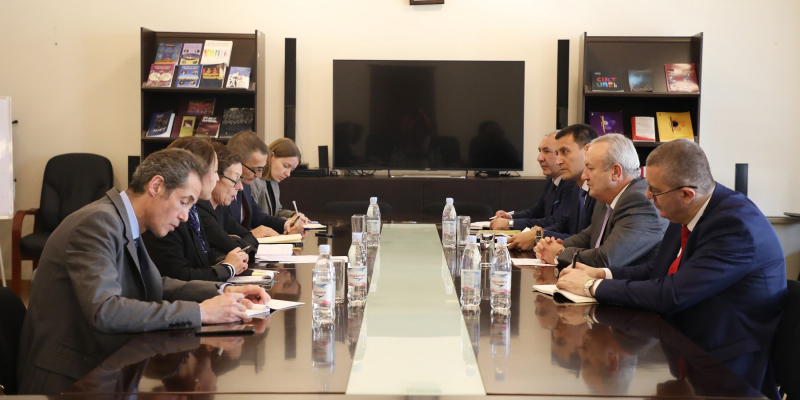 Issues related to the further advancement of relations between the two countries in the field of education and culture, as well as the expansion and enrichment of the multilateral cooperation agenda were discussed at the meeting.

Greeting those present, Minister Vahram Dumanyan noted that the ESCS Ministry is faithful to the commitments undertaken within the framework of Francophonie and is ready to enhance cooperation in this direction.

Ambassador Anne Louillot presented the willingness of the French side to promote the advanced teaching of the French language in general educational institutions of the Republic of Armenia and the expansion of the program, which will contribute to improving the efficiency of teaching the French language in schools. As a successful model, the Ambassador noted the example of Yerevan High School №. 119, emphasizing that she could communicate fluently in French with the students of the school. To this end, she proposed to implement similar programs and advance the level of French language teaching also in the regions of Armenia, in particular, in Gyumri. The Ambassador also pointed to the implementation of such a program in the city of Kapan, emphasizing the possibility of cooperation between the Syunik region and French Lyon.

The sides also touched upon the activities of the French Institute in Armenia, underlining that it will give a new quality to the cooperation between France and Armenia in the fields of education and culture. The French side expressed willingness to send young teachers to Armenia to support French language teachers. According to the Ambassador, this process will be supported by the French Institute in Armenia. She also added that the institute will carry out the activities of teaching and testing the French language in an informal education format.

The program “Armenia: Education, Preservation and Evaluation of Heritage” was also discussed at the meeting, through which France promotes the preservation, restoration and evaluation of the cultural heritage of Armenia. It was noted that the program includes three components: the first direction is dedicated to education and training, and the second one is to the restoration of the Big Desert of Tatev Monastery Complex. The National Institute for Heritage is engaged in both components. The third direction regards the new concept of the permanent exhibition of the Erebuni Museum. It was emphasized that this program can serve as a model for cooperation in other sectors as well.

Other issues of mutual interest were also discussed at the meeting.