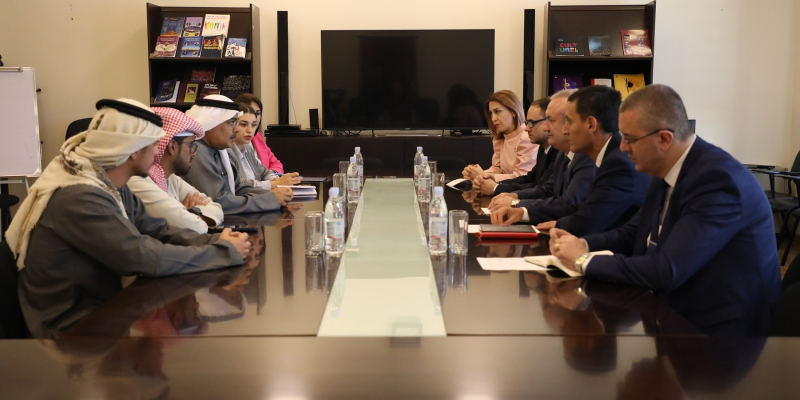 ESCS Minister Vahram Dumanyan received the Delegation of the United Arab Emirates, which is on an official visit to the Republic of Armenia. The delegation includes the Chairman of the Sharjah Institute for Heritage His Excellency Dr. Abdulaziz Almusallam, Head of the International Relations Department of the same Institute Ahmed Al-Dah, and Deputy Head of International Relations Saif Al-Hajri.

Minister Dumanyan welcomed the delegation headed by the Chairman of the Sharjah Institute for Heritage His Excellency Dr. Abdulaziz Almusallam, emphasizing the existing strong friendly ties and warm relations between the two peoples.

In regard to the “Sharjah Heritage Days” annual festival held in the United Arab Emirates on March 10-28, 2022, the Minister expressed his gratitude for receiving Armenia as an honored guest and for the opportunity to present our country with a separate, representative pavilion.

“We attach great importance to similar programs, as they contribute to the advancement of cultural cooperation and closer friendly relations between the two peoples, providing an opportunity to get to know each other more deeply. We would like such events to become regular and be organized annually with mutual visits in both countries,” noted Minister Dumanyan, emphasizing the institutional cooperation in the direction of creating new platforms for intercultural dialogue, implementation of translation programs and experience exchange in the field of monument restoration.

The Minister expressed confidence that during the visit the delegation headed by the Chairman of the Sharjah Institute for Heritage will get acquainted with the rich cultural heritage of Armenia.

Chairman of the Sharjah Institute for Heritage, His Excellency Dr. Abdulaziz Almusallam thanked the Minister for the invitation and warm welcome, highlighting the existence of strong cooperation and warm relations between the two countries and peoples, as well as the willingness of enhancing them.

The head of the delegation also highlighted the importance of implementing programs aimed at advancing intercultural cooperation, in the direction of exchanging experience, implementing translation programs, mutual recognition of the cultures of the two countries, learning languages, replenishing literature in libraries and programs of bilateral interest.

During the meeting, Minister Vahram Dumanyan presented to his colleague the concerns related to the distortion and destruction of Armenian historical and cultural monuments and cultural values that came under the control of Azerbaijan as a result of the military aggression against Artsakh in 2020, noting also that it is of universal cultural value. In response, the head of the delegation noted that he would convey the presented concerns to the UAE Government.

Note that at the invitation of the RA ESCS Minister, the delegation of the United Arab Emirates, which is on an official visit to the Republic of Armenia on October 17-21, today visited Tsitsernakaberd - Armenian Genocide Memorial Complex and Museum-Institute, where the guests got acquainted with the permanent and temporary exhibitions of the Museum and made a note in the memory book of the guests.

Within the framework of the visit, visits are scheduled to cultural institutions, the Dashtadem Fortress and the Zvartnots Cathedral.