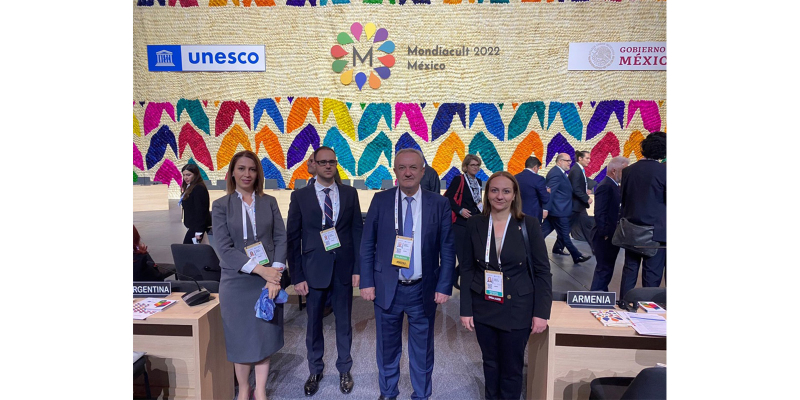 On September 28, the delegation headed by the RA ESCS Minister Vahram Dumanyan took part in the opening ceremony of the UNESCO World Conference on "Cultural Policies and Sustainable Development" in Mexico City. The Armenian delegation includes Deputy Minister Alfred Kocharyan and Head of the Department for Cultural Heritage and Folk Crafts Astghik Marabyan.

Participation in the Conference is an additional opportunity to popularize and disseminate Armenian culture abroad, which will become an incentive for the advancement of cultural ties with foreign countries, as well as for strengthening cooperation with partner organizations of Mexico in the context of reaching new agreements and developing joint programs.

It should be noted that the UNESCO “World Conference on Cultural Policies” (MONDIACULT 2022) is held from 28 to 30 September 2022 under the auspices of the UNESCO Director-General and is hosted by the Government of Mexico.

MONDIACULT 2022 is a unique opportunity to continue building a common agenda in which culture is at the core of the global development agenda.

The Conference will cover four topics: “Renewed and Strengthened Cultural Policies”, “Culture for Sustainable Development”, “Heritage and Cultural Diversity during Crisis", and “Future of Creative Economy”.