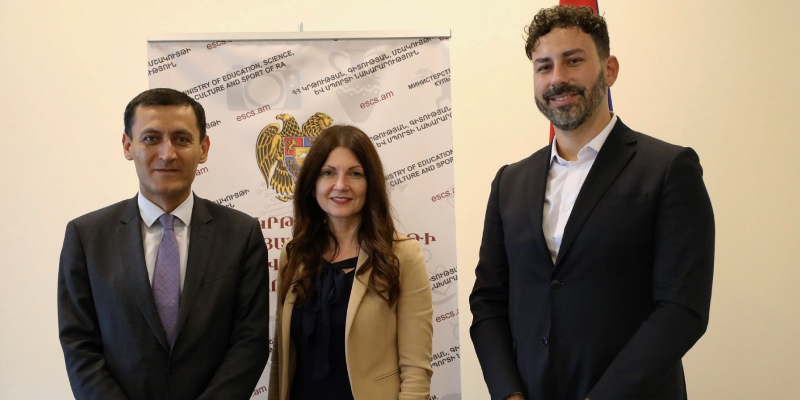 RA Deputy Minister of Education, Science, Culture and Sports Arthur Martirosyan received First Deputy Prime Minister and Adviser to the Minister of Culture of the Republic of Serbia Vuk Radulovic.

The meeting was also attended by Ambassador Extraordinary and Plenipotentiary of the Republic of Serbia to the Republic of Armenia Tatjana Panajotovic-Cvetkovic and Embassy Councilor Zoran Marinkovic.

Vuk Radulovic arrived in Armenia as part of the “STARMUS” Festival in Armenia on September 5-11, 2022.

ESCS Deputy Minister Arthur Martirosyan welcomed the representative of the Republic of Serbia and thanked him for accepting the invitation and participating in the Festival.

Arthur Martirosyan informed that reforms in the fields of education, science and culture are currently being implemented in Armenia, and more money is constantly being allocated from the state budget for the development of general education and science. He noted that in this context, the ESCS Ministry is interested in the experience of Eastern Europe and especially Serbia.

The parties considered the possibility of advancing cooperation in the fields of education, science, and culture. The ways of cooperation within the framework of the EU and CoE programs ("Erasmus+", "Horizon Europe", "Creative Europe", "Cultural Paths") were also touched upon.

The importance of implementing practical steps of cooperation in the field of culture was highlighted, in particular, the possibility of establishing collaboration between the cultural capital of Serbia, Novi Sad and any city of Armenia.

At the meeting, the sides also touched upon the issue of preserving Armenian cultural heritage in the territories that came under the control of Azerbaijan as a result of the 44-day war.