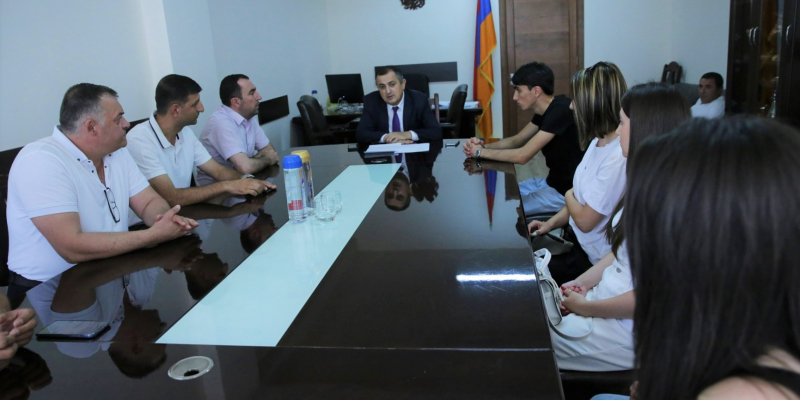 In addition to the medalists, their coaches and representatives of federations also participated in the meeting.

The ESCS Deputy Minister congratulated the Armenian athletes on winning the medals and generally considered the results satisfactory: “The shooters really performed well, sambo athlete Mher Ohanyan also performed perfectly, I followed his performances. I am sorry that the beach volleyball team could not win a medal, although they were very close to it. The artistic gymnast made it to the finals and could have won a medal, but she didn't. Anyhow, I am pleased with the results that we achieved at the international sports games “Children of Asia”.”

Armenia won 4 medals at the 7th “Children of Asia” International Sports Games in Vladivostok held from July 27 to August 8.

Sambo athlete Mher Ohanyan won the title of champion, becoming a gold medalist (64 kg), and the other 3 medals were won by the shooters. Rifle athlete Nare Melkumyan became a silver medalist and Gagik Nikoghosyan - a bronze medalist. Gagik Nikoghosyan and Nare Melkumyan in the team mix exercise (1 boy + 1 girl) won bronze medals with a score of 17:13.

According to the head coach of the Armenian sambo team Vovik Khodjyan, the result of Mher Ohanyan was very encouraging for the whole team: “Mher fought competently, as a result of which he won a gold medal. We are glad that he brought a gold medal to our team. This medal was pride for all of us. Other sambo wrestlers were hindered by a lack of experience. I think, were they more experienced, we could have won 2-3 gold medals. We had this opportunity, but it was not enough.”

As for the shooters, they won 4 medals at the Shotgun World Championships 2022, held on August 1-9 in Chateauroux, France, in the 10-meter Running Target.

Karen Giloyan highly appreciated the participation of shooters in the World Championship and wished them further success: “First of all sport is a war of nerves. The strongest is the one who is also able to control his/her emotions. I want to express my gratitude to you, the coaches and the presidents of federations. Thank you for participating, elevating our country’s name and winning medals. We are looking forward to better results. The state is ready to stand with you and do its best to provide favorable conditions for training and advancing without any issues.”

It should be reminded that Lilit Mkrtchyan and Arusyak Grigoryan took 3rd place in the World Championship for Adults. Mkrtchyan moved to the final on 3rd line scoring 555 points in a 10-meter normal run, 30+30 shots in the qualifying round of the exercise, where she had already defeated the Qatar representative with a score of 6:0 and became the bronze medalist. Arusyak Grigoryan competed in the 10-meter mixed run, 20+20 shooting exercise. She won the bronze medal scoring 367 points. By the way, Lilit Mkrtchyan was only one point behind her in this exercise, taking 4th place in the final result.

Gor Khachatryan won the title of champion in the Junior Championship. The student of Gyumri Children and Youth Shooting Sports School competed in a 10-meter, mixed run, 20+20 shooting exercise. Scoring 386 points, he repeated the world youth record and won the gold medal.

Gohar Harutyunyan stood on the third step of the honorary pedestal in the youth struggle. Harutyunyan scored 553 points and moved to the finals with the 2nd line in the qualifying round of the exercise in a 10-meter normal run, 30 + 30 shots, where with a score of 6:1 she gained an advantage over the representative of Ukraine and won the bronze medal.

At the meeting with the ESCS Deputy Minister the athletes and the coaches shared their impressions and told about the success achieved, as well as the omissions made.