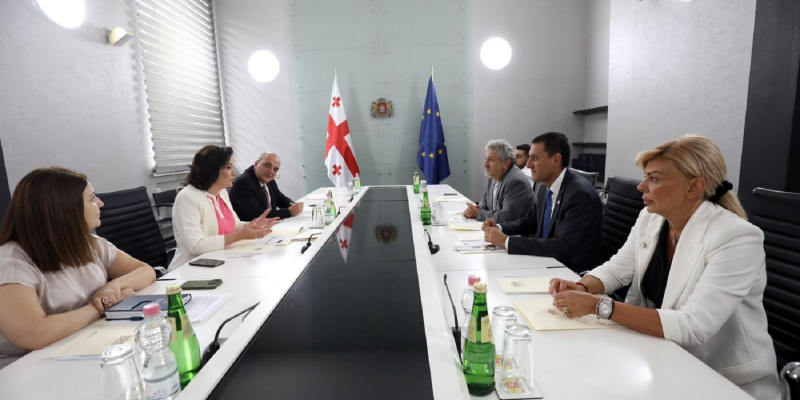 The delegation headed by RA Deputy Minister of Education, Science, Culture and Sports Arthur Martirosyan, who is in Georgia on a working visit, had a meeting with Deputy Minister of Education and Science of Georgia Nunu Mickiewicz, the Ministry's staff, as well as representatives of the National Academy of Sciences of Georgia, the Rustaveli National Science Foundation of Georgia, culture, business and tourism and young scientists on August 10-11.

During the visit organized by the Ministry of Education and Science of Georgia, RA ESCS Deputy Minister Arthur Martirosyan, members of the organizing group of the “STARMUS” International Scientific Festival headed by the astrophysicist, co-founder of the “STARMUS” Festival Garik Israelyan, presented to Georgian colleagues the international “STARMUS VI” festival, connecting science and culture, in order to ensure active participation of neighboring Georgia in this unprecedented festival aimed at popularizing science.

Deputy Minister of Education and Science of Georgia Nunu Mickiewicz emphasized the possible participation of Georgian scientists in the festival and noted that such events are important for the promotion of young scientists.

It should be added that the festival program includes a number of congresses and scientific conferences, various cultural events through which science, art and music will be presented to the public in a unique way. Dozens of celebrated scientists, engineers and astronauts, including Nobel laureates, world music stars, representatives of science and art, and the general public will participate in the events.

The vision of the “STARMUS” festival is to create new frames and opportunities for the younger generation, inspire them with the desire to acquire new skills, increase the level of dissemination of knowledge and learning, providing access to everyone. The organization of the festival will also create new opportunities for cooperation in the field of art and science.

Note that the “STARMUS FESTIVAL VI: 50 years on Mars” festival dedicated to the 50th anniversary of the first landing on Mars will be held in Armenia on September 5-10.