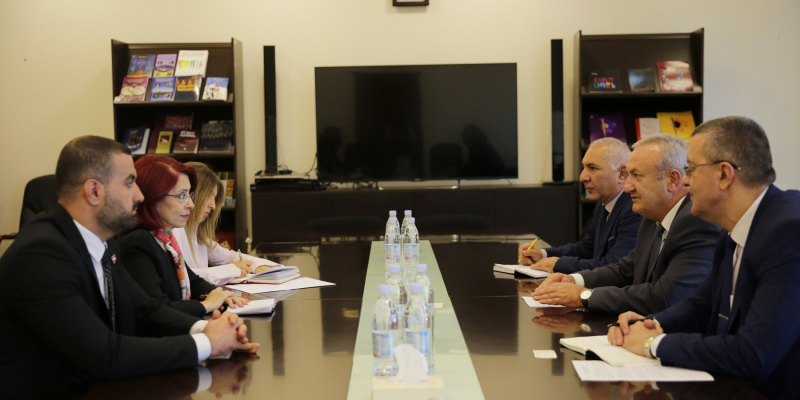 Vahram Dumanyan congratulated Nora Arisyan on assuming the post of Ambassador and expressed confidence that her diplomatic activities will promote the development of Armenian-Syrian relations and the expansion of mutually beneficial cooperation.

The Minister emphasized the importance of traditional and friendly ties between the two peoples based on mutual trust. In this context, Vahram Dumanyan noted that due to certain circumstances, the process of signing documents on the upcoming cooperation between the two countries has been delayed, confirming the need for its resumption.

The Minister emphasized the importance of the activities of the Armenian Studies Department of the University of Damascus and the possibility of implementing joint programs; and also suggested considering the possibility of resuming Arabic language studies at the University of Aleppo for the citizens of Armenia. Vahram Dumanyan suggested to the Ambassador to advance the activities and collaboration of the chairs of Arabic studies in the RA higher education institutions and the chairs of Armenian studies in the universities of the Syrian Arab Republic. In this regard, the Minister underlined that 282 Syrian citizens are currently studying at the universities of Armenia, of which 270 are Armenians by nationality.

Vahram Dumanyan also touched upon the issues of further preservation of the Armenian cultural heritage, which came under the control of Azerbaijan as a result of the military aggression against Artsakh in 2020, emphasizing that no effort should be spared to refrain Azerbaijan from destroying Armenian historical monuments and distorting their origin.

Ambassador Nora Arisyan noted that her tenure coincided with the 30th anniversary of the establishment of diplomatic relations between the two countries, within which various important events are envisaged. She reaffirmed her willingness to advance the cooperation between Armenia and Syria and implement new programs based on the centuries-old friendly relations between the two peoples.

The ambassador emphasized that she highly appreciates Armenian culture, expressing hope that Armenian artists will share their experience with their Syrian counterparts. Nora Arisyan also made a reference to the cooperation in the field of education, in particular, the development of Arabic studies at YSU and the organization of education of Armenian students in Syria. The Ambassador also highlighted the importance of cooperation between the two countries in the field of science and the organization of mutual visits of lecturers and scholars.

Vahram Dumanyan invited the Ambassador to participate in the upcoming “STARMUS VI” International Festival in Armenia on September 5-11.

Issues related to the next session of the Armenian-Syrian intergovernmental joint commission were also considered during the meeting.

Note that, earlier Minister of Education, Science, Culture and Sports of the Republic of Armenia Vahram Dumanyan received the delegation headed by the head of the Syria-Armenia Friendship Group of the People's Assembly of the Syrian Arab Republic Lucy Iskanyan. During the meeting, the importance of the advancement of Armenian-Syrian friendly relations was highlighted.