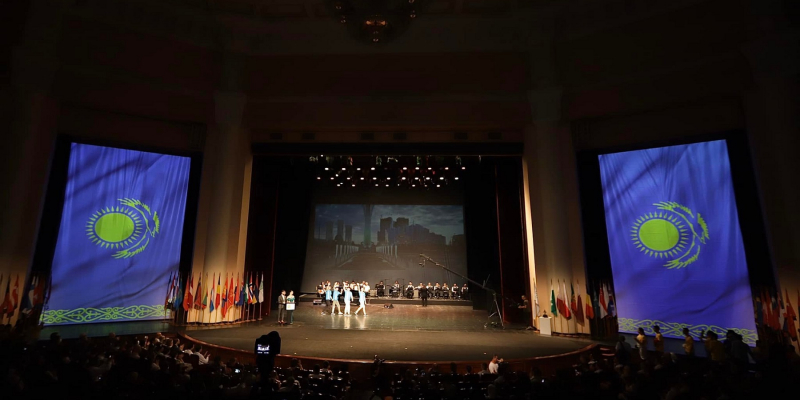 The opening ceremony of the 33rd International Biology Olympiad was held at the Al. Spendiaryan National Academic Theatre of Opera and Ballet.

Chief of Staff of the Prime Minister of the Republic of Armenia Arayik Harutyunyan, RA Minister of Education, Science, Culture and Sports Vahram Dumanyan, Chairman of the “Association of the International Biology Olympiad” Ryoichi Matsuda, Rector of Yerevan State University Hovhannes Hovhannisyan participated in the event. ESCS Deputy Ministers Zhanna Andreasyan, Karen Trchunyan, Arthur Martirosyan, and Karen Giloyan, as well as NA Deputies, other high-ranking officials, ambassadors accredited to Armenia, members of the delegations of the International Organizing Committee of the Olympiad and the jury, participants of the Olympiad from more than 70 countries, representatives of the fields of education and culture also attended the event.

The official event was held according to the guidelines of the Steering Committee of the International Biology Olympiad. The flag and the trophy of the Olympiad were raised on the stage, followed by the parade of student teams of the participant countries who arrived in Armenia.

“The honor to host this important event in Armenia was granted back in 2018 during the Olympics in Tehran by the decision of the International Biology Olympiad Association. We have undertaken this responsibility with the greatest willingness and passion. Being the Minister of Education and Science of the Republic of Armenia back then, I had the honor to sign a memorandum on holding the Olympiad and I am glad that we have been consistent despite all the difficulties and challenges of recent years, and today the International Biology Olympiad is already becoming a reality in our country,” stated Chief of Staff of the Prime Minister of the Republic of Armenia Arayik Harutyunyan in his speech.

ESCS Minister Vahram Dumanyan welcomed the international guests on the occasion of their visit to Armenia for the important scientific and educational event: “It is undeniable that in the 21st century, the achievements of Biology are very important, which are a source for new developments and technological solutions. You are the future masters of the Earth and the future of humanity depends on you. As young biologists, as people who are in love with the science of life, preserve and protect our planet, take care and develop for the benefit of humanity.”

The President of the “International Biology Olympiad” Association thanked his Armenian colleagues for the hospitality and organization of the event in this post-pandemic period. He also specially congratulated the participants: “Congratulations to all of you on winning the Biology Olympiad in your countries.

In this sense, I can say that you are all winners.

Your outstanding achievements in Biology will be recognized and awarded today and during this week according to the results of your participation in this event.”

Then the texts of the oath of the participants of the Olympiad and the jury members were performed.

The opening ceremony was accompanied by cultural performances.

Note that the 33rd International Biology Olympiad is being held in Armenia from 10-18 July.