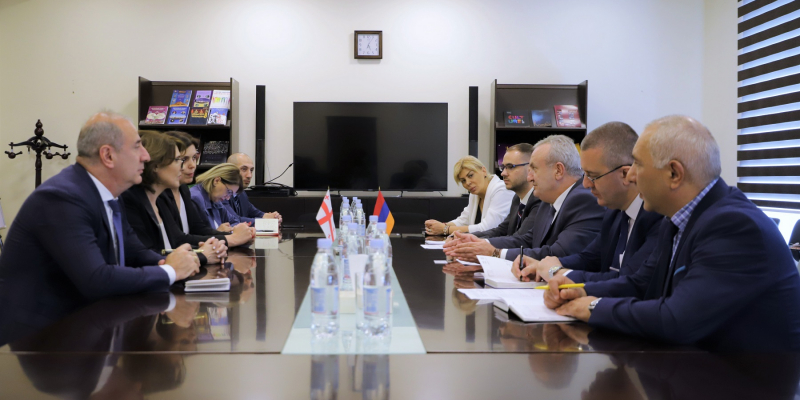 RA Minister of Education, Science, Culture and Sports Vahram Dumanyan received the delegation headed by Chairman of the Culture Committee of the Parliament of Georgia Elisso Bolkvadze.

ESCS Deputy Minister Alfred Kocharyan and Charge d'affaires of the Embassy of Georgia in Armenia Irakli Kvanchakhadze also participated in the meeting.

Minister Vahram Dumanyan thanked Elisso Bolkvadze for the visit and emphasized that the Armenian and Georgian peoples have many common interests, which are based on the centuries-old friendship between the two peoples.

Addressing Elisso Bolkvadze as Chairman of the Culture Committee of the Parliament of Georgia, the Minister touched upon the urgency of preserving the monuments of cultural values emphasizing their universal importance.

“The priority for us is to prevent the threat to Armenian cultural monuments in the territories under the control of Azerbaijan. Apart from being Armenian, they are of great universal value and their preservation is vital,” noted the Minister adding that the Armenian side confides in the international community and the possible support of the Georgian partners in this issue.

The sides also touched upon the existing cultural programs and upcoming projects of mutual interest.

Chairman of the Culture Committee of the Parliament of Georgia Elisso Bolkvadze thanked for the meeting and the discussion of upcoming joint programs. She underlined that she has always been ready to advance the cultural life of Armenian youth in Georgia, especially on international platforms.

Elisso Bolkvadze inquired about the process of interdepartmental and legislative regulations in Armenia, in response to which Minister Vahram Dumanyan stated that the Armenian education sector is currently undergoing active reforms, and constructive discussions with tangible results are held both in the RA Government, the National Assembly, and other stakeholders.

According to Elisso Bolkvadze, they are also in a new period of educational reforms and, as a priority, attach great importance to the introduction of art education in the education sector with the perspective of cultural development.

The sides outlined several important measures that will strengthen and give a new quality to the Armenian-Georgian cultural relations. The importance of holding events on the eve of the 30th anniversary of the Armenian-Georgian diplomatic relations and concerts of young Armenian and Georgian performers was highlighted.

According to Elissso Bolkvadze, next year it is planned to have an Armenian day in Batumi and present an exhibition dedicated to Sergey Parajanov. She expressed hope that the Armenian side, headed by Minister Vahram Dumanyan, will attend the event.

The Minister invited his Georgian partners to participate in the anniversary events dedicated to the 100th anniversary of Armenian cinema, which is scheduled in 2023, highly appreciating the permanent value of the art of Georgian cinematographers.

Other issues of mutual interest were also discussed at the meeting.