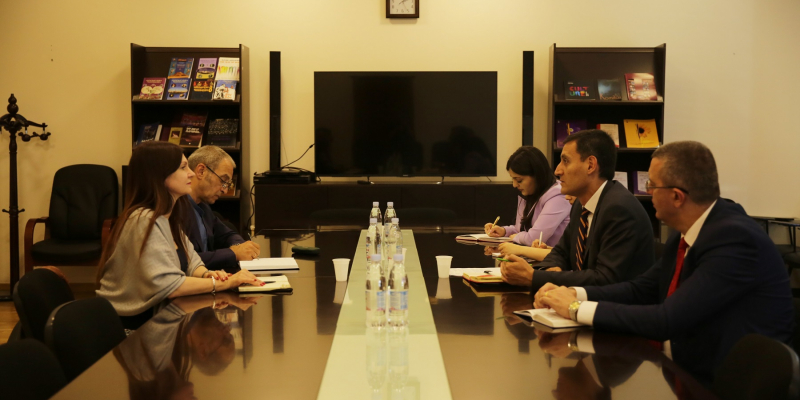 RA Deputy Minister of Education, Science, Culture and Sports Arthur Martirosyan received the Ambassador Extraordinary and Plenipotentiary of the Republic of Serbia to the Republic of Armenia Tatjana Panajotovic.

ESCS Deputy Minister welcomed the Ambassador, underlined the importance of consistent steps aimed at cooperation between the two countries in various fields.

Touching upon the bilateral relations, A. Martirosyan highlighted the issues of preservation and restoration of cultural heritage, monuments of historical and cultural value, and pointed to the historical ties between Armenia and Serbia in this field. The Deputy Minister also briefly presented the activities of the centers for Armenology in other countries, emphasizing the importance of the possibility of establishing one in Serbia.

Thankful for the reception, Ambassador Tatjana Panajotovic expressed her satisfaction with the possibility of cooperation in the fields of education, science, culture and sports.

Reference was made to the “Apricot Tree Film Festival” scheduled for August 2022 in Ujan, in which Serbian filmmakers are participating, presenting documentaries.

The sides considered the possibilities of studying Serbian and Armenian languages, lectures, and the establishment of a chair in the universities of the two countries. Issues related to the implementation of joint programs for the translation of fiction, the training of translators, and linguistic research in various fields were considered. In this context, the expansion of opportunities to provide a scholarship to students was emphasized.

The Deputy Minister and the Ambassador also touched upon the importance of a number of current programs, namely "Erasmus+", and "STARMUS", and outlined possible ways of sports cooperation.