Armenia and Qatar sign an agreement on cooperation in the field of education, higher education and scientific research 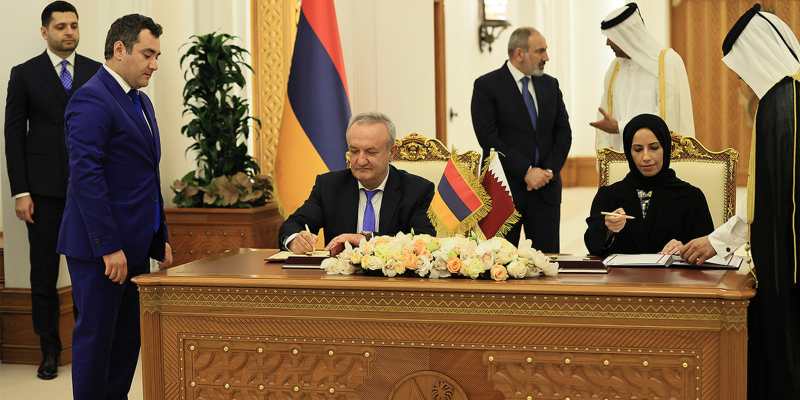 RA Minister of Education, Science, Culture and Sports Vahram Dumanyan left for the State of Qatar today as a member of the Government Delegation headed by the RA Prime Minister Nikol Pashinyan.

Cooperation opportunities were also discussed in the fields of education, including student exchange, science, healthcare, and culture. The broad potential for advancing ties in all the mentioned fields was highlighted, for the implementation of which the Prime Ministers of the two countries gave specific instructions to the heads of the corresponding government departments.

Following the meeting, a number of documents were signed between the two countries in the presence of the Prime Ministers of Armenia and Qatar. RA ESCS Minister Vahram Dumanyan and Qatar Minister of Education, Higher Education Buthaina bint Ali Al-Nuaimi signed an agreement between Armenia and Qatar on cooperation in the field of education, higher education, and scientific research․

RA Deputy Prime Minister Hambardzum Matevosyan and Deputy Prime Minister, Minister of Foreign Affairs of Qatar Sheikh Mohammed bin Abdulrahman Al-Thani signed a Memorandum of Understanding between the Ministries of Foreign Affairs of Armenia and Qatar on political consultations, as well as a Memorandum of Understanding between the “Armenpress” News Agency and the Qatar National News Agency was signed on information exchange.

The Mayor of Yerevan Hrachya Sargsyan and the Minister of Municipality of Qatar Abdulla bin Abdulaziz Al-Subaie signed an agreement on the declaration of the sister cities of Yerevan and Doha.

RA Minister of Health Anahit Avanesyan and the Minister of Public Health of Qatar Mrs. Hanan bint Mohamed Al Kuwari signed an agreement on cooperation in the field of healthcare between the Republic of Armenia and the State of Qatar.

Rector of YSU Hovhannes Hovhannisyan and Rector of Qatar University Hassan bin Rashid Al-Derham signed an agreement on cooperation between the two universities.