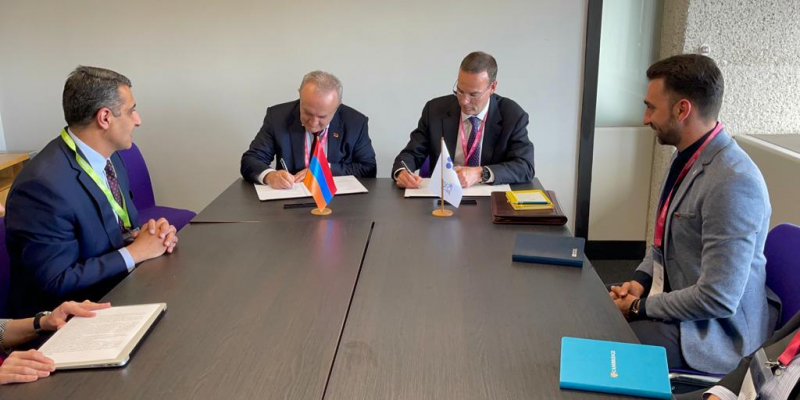 Within the framework of the visit to the United Kingdom of Great Britain and Northern Ireland (London) to participate in the Education World Forum, RA ESCS Minister Vahram Dumanyan had a meeting with the Chief Executive of the British Council Scott McDonald on 24 May.

The Minister added that within the framework of the partnership with the British Council Armenia Office, in accordance with the vision and priorities of the RA ESCS Ministry, a great deal of important activities has been carried out in the following directions: development of a policy and framework for continuous professional orientation of schools in Armenia, "Future English: Roads to Excellence” conducting research in the English teaching system, in-depth research and promotion of innovations, Implementation of research projects "Impact of English” and "Coding skills: Connecting present to the future".

The new Memorandum will support the launch of the document "Policy and framework for continuous professional development in public schools of the Republic of Armenia" developed by the British Council. 1000 English teachers will be involved in the process, and the Continuing Professional Development (CPD) framework will be piloted.

At the same time, the Memorandum envisages the implementation of online CPD programs for English teachers in public schools of the Republic of Armenia through the online platform of the teachers' community.

“Within the framework of the visit to the United Kingdom, the RA ESCS Ministry and the British Council reaffirm their willingness in the context of ongoing cooperation by signing a new Memorandum of Understanding. This memorandum will complement the logic of the professional development of teachers and will be piloted among thousands of English teachers, making a way for an important reform. I think that this cooperation will ensure new perspectives for enhancing the development of the Armenian-British cooperation in the field of education and culture in the near future,” summed up Vahram Dumanyan.

It should be noted that within the framework of the Education Forum, RA ESCS Minister Vahram Dumanyan and Deputy Minister Zhanna Andreasyan also had a meeting with the Executive Director of the Higher Education Quality Assurance Agency of the United Kingdom of Great Britain and Northern Ireland Alastair Delaney and Minister of Education of Finland Li Andersson. During the meetings, issues related to the prospects of bilateral cooperation were considered.

Note that the Education World Forum is attended by delegations from more than 200 countries, including ministers from 112 countries.