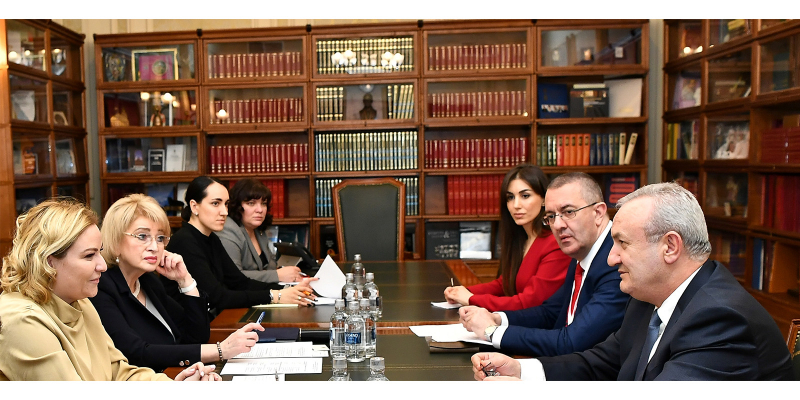 Minister Olga Lyubimova highly appreciated the performances of Armenian artists and ensembles periodically organized in Russia and stressed the importance of holding the meeting, especially in 2022 within the framework of the 30th anniversary of the establishment of diplomatic relations between Armenia and Russia.

During the meeting, a reference was made to the events of the “Armenian Culture Days in Russia” planned for 2022. Minister O. Lyubimova suggested organizing the opening ceremony of the program at the Moscow State Academic Philharmonic on June 10, 2022. She emphasized the importance of the participation of the Komitas State String Quartet in the event and noted that the organizers of both sides are always in direct contact with each other to organize the event at a high level.

Minister V. Dumanyan underlined the importance of expanding cultural cooperation between the two friendly states and for this purpose signing of the program on “Cooperation in the field of culture between the RA Ministry of Education, Science, Culture, Sports and the Ministry of Culture of the Russian Federation, for 2022-2025” which clearly defines the key guidelines for the coming years. He expressed the willingness of the RA ESCS Ministry to host the event "Days of Spiritual Culture of Russia" in Armenia in 2022.

Minister O. Lyubimova also referred to the cooperation in the field of cultural education and the implementation of joint programs, in particular, expressing willingness to admit Armenian students to cultural higher education institutions of the Russian Federation. She also suggested considering the possibility of organizing multimedia exhibitions and master classes by leading specialists of Armenia and the Russian Federation.

It should be noted that within the framework of the meeting, the program on “Cooperation in the field of culture between the RA Ministry of Education, Science, Culture, Sports and the Ministry of Culture of the Russian Federation, for 2022-2025” was signed.

At the end of the meeting, Minister Vahram Dumanyan invited Minister Olga Lyubimova to visit Armenia, expecting that the visit will be within the framework of the "STARMUS VI. 50 Years on Mars" exclusive festival scheduled for September 5-10, 2022 in Armenia.