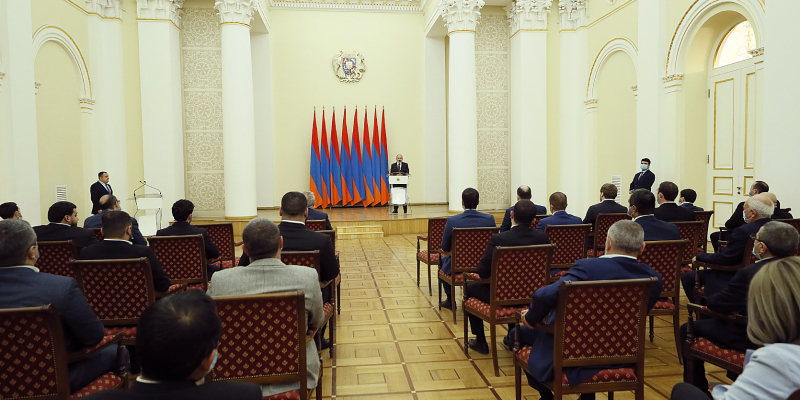 On December 30, the official awarding ceremony of the best 10 athletes of 2021 was held with the participation of RA Prime Minister Nikol Pashinyan. The event was attended by the Chief of Staff of the Prime Minister Arayik Harutyunyan, Minister of Education, Science, Culture and Sports Vahram Dumanyan, Deputy Minister of Education, Science, Culture and Sports Karen Giloyan, Secretary-General of the RA National Olympic Committee Hrachya Rostomyan, many representatives of the sports world.

First, Prime Minister Pashinyan thanked the athletes for their performances during 2021 and, chiefly, for their victories: “You know that in 2021, all of us and our society needed victories twice as much as needed. And in the socio-psychological state that has been created in the Republic of Armenia after the 44-day war, sports performances become of the greatest importance, they gain greater significance – at both state and national levels. In this regard, the competitions of 2021, participation in them, and the successes recorded are worthy of double appreciation.”

“Today we are facing serious issues in terms of preserving the health of our youth, and I think our celebrated athletes should inspire the young men to exercise sports with their successes achieved in big sports. This is the reason why we adopted such a policy and promised that: for those who achieve the title of the Olympic champion, we will build sports schools in their name in the places they prefer. We are doing this not only to pay tribute to our athletes but we are also convinced that such sports centers will attract young people to attend and do sports and physical education,” stated Nikol Pashinyan.

ESCS Deputy Minister Karen Giloyan underlined that by the results of 2021 a rather strong team of ten athletes has been formed: “When the top ten athletes of Armenia were being chosen, sports journalists and head coaches of the national teams faced a very serious problem, and as a result, two European champions did not get into the top ten list. That's the strongest top ten we have this year. Let's hope that we will manage to keep up the pace in 2022.”

By the way, only Elina Danielyan was not present at the awarding ceremony, as she was participating in the World Rapid Chess Championship in Warsaw. The head coach of the Armenian women's national team, Zaven Andriasyan, took part in the awarding ceremony instead of her.

The prize fund of the "Top 10 Athletes of the Year" competition is 50 million AMD. Each athlete included in the top ten will receive 4 million AMD, and 1 million AMD will be allocated to the members of their coaching staff.