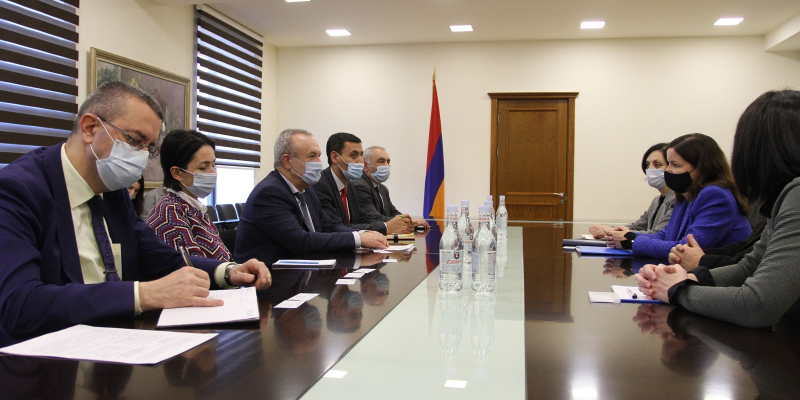 The Minister congratulated Christine Weigand on the appointment and highlighted the significance of the programs implemented with the support of the UN Children's Fund, which derives from the reforms policy in the field of general education. In the scope of the best response to the challenges in the field of general education and solving existing issues, V. Dumanyan expressed willingness to further deepen effective collaboration between the two structures. The Minister stated that large-scale reforms are currently being implemented in the ESCS sectors, in particular, pointing to the changes in the law on “General Education" and the draft Strategy for the Development of Education.

Representative of the Armenian office of the UN Children's Fund Christine Vaigand, in turn, noted that the field of education is one of the four main directions determined for the next four years in the frame of cooperation with the Government of Armenia. She underlined that there is a long-standing experience of effective collaboration with the MoESCS, stating that the fields of coordination of the Ministry are very wide, ranging from preschool education to science, culture, sports, and youth. Christine Vaigand noted that the ESCS Ministry is currently actively cooperating with the UN Children's Fund under the “Global Partnership for Education” (GPE) program, which aims to promote reforms in the field of general education, bringing together international partner structures, civil society, and private foundations.

ESCS Deputy Minister Zhanna Andreasyan highly appreciated the substantive and technical support of the Armenian office of the UN Children's Fund in ensuring the continuity of education and distance learning, underlining the assistance in equipping and setting up a video-tutorials shooting pavilion in the National Centre for Educational Technologies. She also highlighted UNICEF's support for the introduction of alternative cost-effectiveness preschool models. Regarding the cooperation with the GPE, Zhanna Andreasyan expressed confidence that the research carried out in the scope of the program will help to ensure that the reforms of general education are fact-based, citing as an example the assessment system, which is an important component of the new standard.

ESCS Deputy Minister Arthur Martirosyan, in his turn, underlined the connection between the “Global Partnership for Education” (GPE) program and the Education Development Strategy, adding that the draft strategy set out in the action plan of the Government of the Republic of Armenia will be discussed with development partners.

Regarding the access to high-quality education in small and border communities, Minister Vahram Dumanyan noted that this is a very serious issue, and to solve it, the Government of the Republic of Armenia has started implementing a number of processes: for example, for the general education institutions that have a shortage of teachers, a piloting program of distance learning, coordinated by leading teachers of 18 mentoring schools has been implemented from the start of the academic year. The ESCS Minister also pointed out another change: the program for providing educational services for rural settlements of the Kapan consolidated community has been approved, which envisages the launch of a new education model.