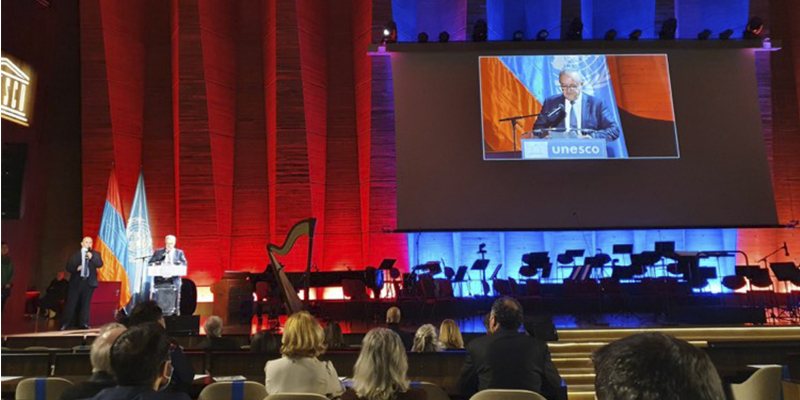 The event, held on September 29 at the UNESCO Headquarters, was also attended by the Armenian delegation headed by Minister of Education, Science, Culture and Sports Vahram Dumanyan and with the participation of Deputy Minister Ara Khzmalyan.

In his speech, the RA ESCS Minister noted that Verneuil is one of the legends of French cinematography, a prominent artist who, being fully integrated into French culture, remained faithful to his Armenian identity. The role of his film heritage in the world of cinematography is invaluable, and his multi-genre works and unique directing style are not subject to any classification.

Vahram Dumanyan added that this event dedicated to the 100th anniversary of Henri Verneuil is of great importance not only from the point of view of preserving the memory of the honored film director, but also presenting high-quality art to the society, and expressed gratitude to all the partners who contributed to the event.

Minister of State for Tourism, French Nationals Abroad and Francophonie, attached to the Minister for Europe and Foreign Affairs Jean-Baptiste Lemoyne noted that French art and culture are rich due to the contributions of the artists of Armenian origin.

During the event, a biographical film about Henri Verneuil was demonstrated, and a concert was held, which was accompanied by the screening of digitized posters of Verneuil films.

During the concert, the music from Henri Verneuil’s films was performed by the French “Pasdeloup” Orchestra conducted by Jean-Claude Petty, as well as soprano Lianna Aleksanyan sang the song "Dle Yaman" accompanied by duduk player Levon Minassian, residing in Marseille.