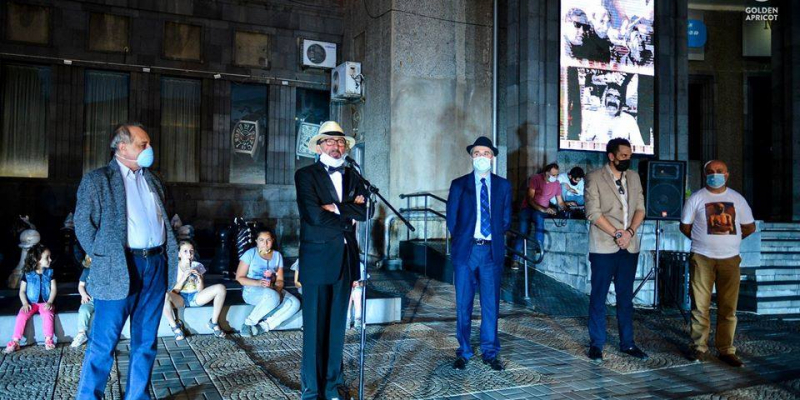 On the square of Charles Aznavour in Yerevan, which was previously transformed into the Star Alley of the prominent Armenian filmmakers by the efforts of the Golden Apricot International Film Festival, the stars of prose and scriptwriter Hrant Matevosyan and publicist, playwright, artist and director Agasi Ayvazyan were opened. The opening ceremony of the stars took place on the evening of July 12 with the participation of a limited number of people, observing all safety rules.

The Deputy Minister of Education, Science, Culture and Sports of the Republic of Armenia Ara Khzmalyan emphasized that such an opening of the “Golden Apricot” is unprecedented due to the limitations of the state of emergency. “I want to thank the organizers of the Golden Apricot, because with this step they prove that it is better to do at least something than nothing at all. I thank them for their will, as they did not allow the history and traditions of the most important cultural event to be interrupted for at least a year,” stated Ara Khzmalyan, also referring to the contribution of two great people Hrant Matevosyan and Aghasi Ayvazyan to the Armenian cinematography.

"Today is a very important day for us, because our elders, who left us, are waiting for our attitude. Some years ago, Golden Apricot opened this Alley of Stars to always commemorate the unjustly forgotten Armenian cinematographers. We love them, we have seen their films, and the difficult conditions in which they created movies. We are their successors, "- the founding president of the Golden Apricot Harutyun Khachatryan noted at the opening ceremony of the stars, emphasizing the path of activities of the two figures and expressing hope that no one will forget their contribution.

The family members of Hrant Matevosyan and Aghasi Ayvazyan spoke at the ceremony, expressing their gratitude to the festival for the initiative and the memory of the cinematographers.

Note that due to the pandemic situation, the main events of the Golden Apricot Yerevan International Film Festival will be held in the fall, November 1-8.

The programs and projects of the GAIFF Pro innovation platform for the development of the film industry of the Golden Apricot Yerevan International Film Festival, long known at the international film market, will generally not be delayed and will be held online on previously defined days, July 13-16.

Video of the ceremony: