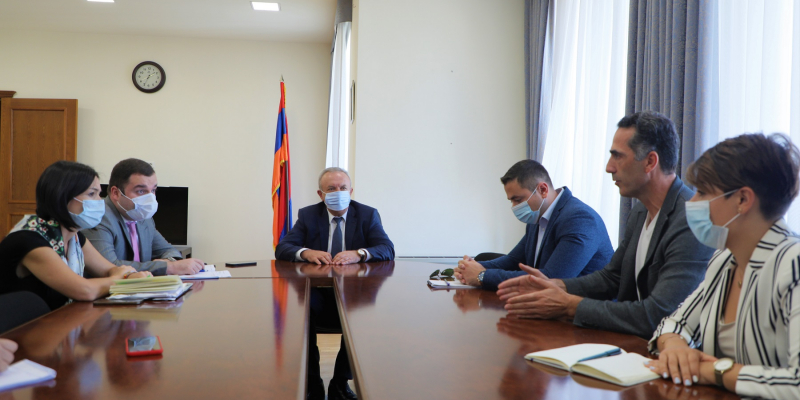 Issues related to the expansion of educational projects implemented by the Foundation were discussed.

Chief Executive Officer of the “Foundation for Armenian Science and Technology” Armen Orujyan emphasized the need to launch the “Unit 1991” program on state institutional basis, given the growing number of program participants, as well as the cooperation with the Armed Forces with a view to further inclusion in the unit of the same name.

ESCS Deputy Minister Zhanna Andreasyan suggested considering the possibility of including the preparatory courses of the “Unit 1991” program, implemented by the Foundation, in the high level of general education in the form of extracurricular activity. The Deputy Minister noted that the development of STEM direction (Science, Technology, Engineering, Mathematics) is also the basis of the new standard of general education and in this respect it is planned to establish science laboratories in all schools of Armenia, which can contribute to the integration of the proposed program into state education programs. This year, in the context of piloting the new general education standard, new laboratories will be established in the schools of the Tavush region, Parallelly with the implementation of the new standard, laboratories will be founded in all schools in the future.

Minister Vahram Dumanyan underlined that in the context of higher education reforms, the issue of developing models for integrating the deferral system with military education is currently being discussed. At the heart of all reforms and projects, the advancement of scientific, technological and engineering directions in all levels of education and science is a priority.

In the closing remarks, the Minister noted that if the goals of leading organizations in the field of education and science are in line with the goals of the state policy, then combining the efforts is necessary in terms of increasing the efficiency and coordinated implementation of activities.

During the discussion, a reference was made to other programs implemented on the initiative of the Foundation for Armenian Science and Technology (FAST), which relate to high technologies, artificial intelligence, as well as the possibilities of their implementation at the academic level.