The Youth Policy Strategy Draft is discussed with Development Partners 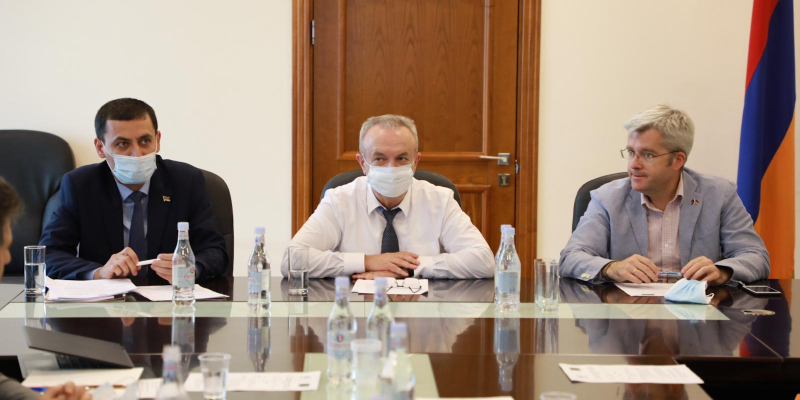 RA Acting Deputy Minister of Education, Science, Culture and Sports Vahram Dumanyan received Development Partners - representatives of international organizations in Armenia, to discuss the Draft of the Youth State Policy Strategy for 2021-2025. Deputy Minister Artհur Martirosyan and հead of the Department for Youth Policy, Supplementary and Continuing Education Gohar Mamikonyan participated in the discussion and presented the project. The organizers of the meeting were the ESCS Ministry and the EU Delegation to Armenia.

Greeting the representatives, Acting Minister Vahram Dumanyan thanked them for the participation in the discussion of the draft Strategy of the Youth State Policy for 2021-2025 and informed that the draft project is submitted on the e-draft platform for public discussion, and until June 3 everyone has the opportunity to make project proposals necessary to refine the project and the outlined approaches, making it more feasible and practical.

“The youth are the bearers of the horrors and consequences of the war. And it is our responsibility to create an opportunity for young people to get on their feet and develop, to reach new heights of development at the local and national levels, to become a happy person and a responsible member of the society,” stated the Deputy Minister.

Head of Cooperation Section at the European Union Delegation to Armenia Gonzalo Serrano, on behalf of the EU Ambassador, welcomed the participants and wished them a productive discussion. Noting that the new discussion is the succession of joint work, he stated that they are ready to continue providing assistance to Armenia in the field of youth policy strategy.

“We are already implementing various programs in this field and are willing to share our best experience. We also attach importance to comprehensive discussions,” said G Serrano proposing to discuss the strengthening of the ties between various strategies - educational, territorial development, health, etc.

The development of the strategy has an unprecedented level of participation. The working group for drafting the document was formed by the order of the Minister, the work was organized both on the online platform and through the working meetings organized in Yerevan, Aghveran and Tsakhkadzor.

The project has been discussed with various youth groups in many cities, large and small communities.

“Our goal is to listen to young people of different target groups as much as possible, reveal their problems and develop the project accordingly,” Deputy Minister Arthur Martirosyan presented the procedure of the activities.

The Deputy Minister underlined the importance of sectoral differentiation in terms of "not giving in to temptation" and not involving everything in the strategy, for example economic development or health issues, which are the responsibility of the relevant ministries.

According to the strategy, 3 groups of activities are distinguished: identification of youth potential, assistance, creation of opportunities for self-realization both in Yerevan and in the regions, cross-sectoral development programs, international commitments undertaken by the Republic of Armenia.

During the meeting, the parties addressed their concerns, proposals and remarks, and discussed the ways of solving them. The importance of international consultations was emphasized.

According to A. Martirosyan, the document was developed in the scope of sectoral issues and capacities, at the same time emphasizing the need and importance of the advice of international experts, especially when drafting the law on “Youth” in the future.

“The strategy is a great kick-off to keep the lives of young people in the center of attention and state support and encourage their active participation,” said the Deputy Minister.

The representative of one of the partner organizations suggested that after the recent events, another study of the issues of the youth sector should be conducted to cover these gaps with an action plan.

The development partners also discussed the demographic crisis after the recent events, the promotion of the birth rate by solving the issues of jobs and wages, enhancing the competitiveness of young people in rural settlements, security issues in border communities, the development of volunteerism, etc.

Deputy Minister A. Martirosyan thanked for the open dialogue and offered to send observations and suggestions on the draft strategy in written form by June 3.