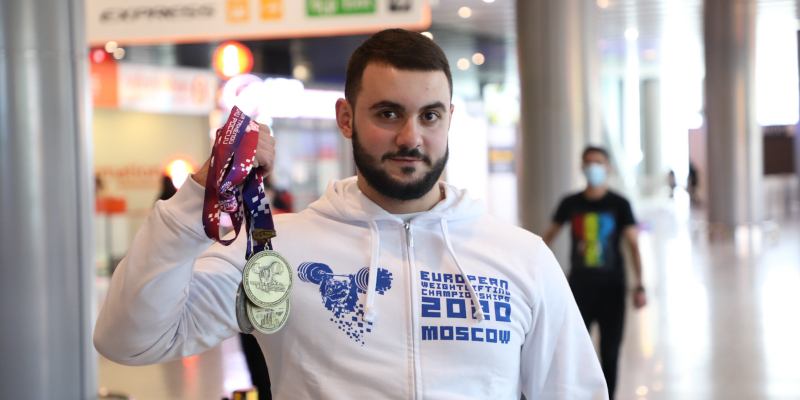 The Armenian national weightlifting team returned from Moscow today, where it won 8 medals at the European Championships (in the double event). Together with the national team, RA ESCS Minister Vahram Dumanyan and Deputy Minister Karen Giloyan also arrived in Yerevan, who were on a working visit to Moscow on April 8-12 and watched the performances of the Armenian athletes from the competition site. At Zvartnots Airport the Armenian delegation received a warm welcome from the representatives of the sports world and numerous fans.

Commenting on the performances of the Armenian weightlifters ESCS Minister Vahram Dumanyan underlined that the results are satisfactory: “The performances of our weightlifters can be considered as magnificent. Long live the Armenian athletes who give us the sense of national pride. The Olympic Games are coming forth and we expect to have champions.”

ESCS Deputy Minister Karen Giloyan noted that the performances of our national team show that in the near future it can become the best in the world: “Following the performances of our weightlifters, you are filled with faith. In 2-3 years, this team will undoubtedly be one of the strongest in the world. Even today the members of the national team are in very good shape, but gaining experience over the years we will fight exclusively for the team victory. Everything will be fine. Never doubt and keep believing!”

Commenting on his performance, European Champion Samvel Gasparyan (102 kg), noted that the gold medal is the result of good preparation: “My goal was to win the championship and it’s worth the hard work. We are pleased to also take second place in this weight category in the person of Arsen Martirosyan. There is no competition between us.”

Two-time World and European Champion, Olympic silver medalist Simon Martirosyan (109 kg), who recorded the first result in the snatch exercise, and got 0 in the clean and jerk, assured that he would be in good shape before the Summer Olympics: “There is no excuse, it just didn't work out what I participated in the championship for. I had no time to get in good shape because of the injury, but I do not despair․ We know the reason for this failure and we are moving towards the Olympic Games in Tokyo, in which we will participate in 200% form.”