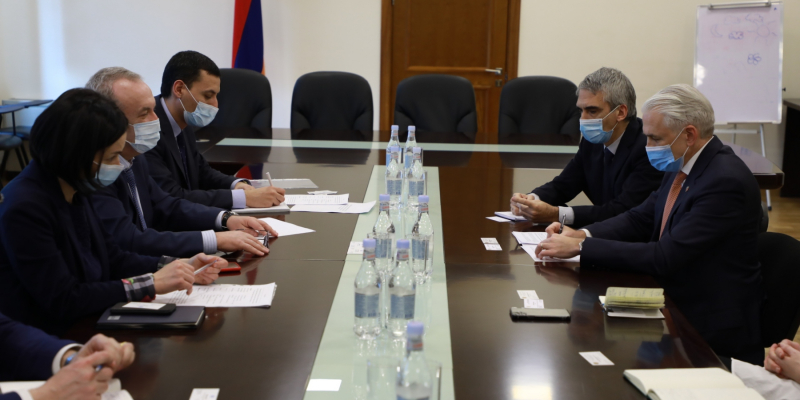 Welcoming the guests, the Minister emphasized the importance of the programs implemented with the assistance of the UN in the field of education, science, culture and sports and expressed hope that they will scale up the activities.

Vahram Dumanyan stated that the UN mission is extremely important, especially in the conditions of post-war crisis.

“The Armenian side expects the assistance of international structures and, in particular, the UN in preserving the historical and cultural heritage that came under Azerbaijani control as a result of the war in 2020. These historical cultural monuments are universal civilizational values created by the Armenian people,” noted the Minister. He also hoped that the UN Office in Armenia will continue its support for the full realization of the right to education for children in the post-war period.

The UN Resident Coordinator in Armenia, Shombi Sharp in his turn, speaking about the importance of cooperation, stated: “The UN Armenia highly appreciates the long-standing close collaboration with the ESCS Ministry. Particularly appreciated are the joint efforts to provide pupils with distance learning tools during COVID-19, create new educational platforms, and support schools with hygiene kits for safe re-opening. Education is one of the driving forces for building human capital and the development of the country. We expect to scale up sharing best practices and supporting educational reforms in Armenia. In particular, in the near future, we will focus on the creation of temporary educational venues and promote inclusive access to quality education for children displaced from Nagorno-Karabakh and who have found refuge in Armenia.”

The UN program targets welfare through education, and in this context the realization of human rights is fostered by promoting access to education, including professional education. The UN representatives noted that programs in the field of youth and sports are also outlined.

Introducing the cooperation with the UN in the field of education, ESCS Deputy Minister Zhanna Andreasyan, underlined the importance of cooperation aimed at the development of a universal inclusive education in Armenia, considering that the preschool education system will have made a transition to universal inclusion by 2023, according to the RA legislation.

The sides also touched upon the cooperation with the World Food Program, noting the importance of the successful implementation of "Sustainable School Feeding" program in regional schools of Armenia. It was noted that in the absence of full-time education due to the pandemic, children were provided with food boxes as part of school meals.

Referring to the challenges of ensuring the continuity of education in the conditions of the pandemic, it was noted that with the effective support of international and local structures, including various UN agencies, it became possible to ensure 85% of students' enrollment in distance classes in Armenia.

ESCS Deputy Minister Arthur Martirosyan reconfirmed the commitment of the Armenian side to the implementation of the activities aimed at achieving the Sustainable Development Goals (SDGs), with particular emphasis on the cooperation with the UN Children's Fund and the World Food Organization within the framework of SDGs 4 and SDGs 2, respectively. He also informed about Armenia's membership in the Global Partnership for Education and expressed confidence that the role of UNICEF as a grant agent will best contribute to the effective implementation of the first stage of the program.

During the meeting, other issues related to the pandemic and the post-war situation were discussed to clarify cooperation programs and expand activities.