Gegham Grigoryan 70: "A person who loves classical music will not cut down a tree”
Culture 29 January 2021 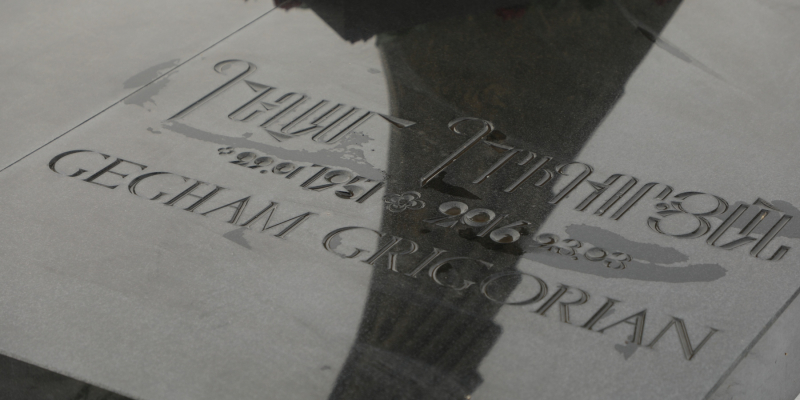 Today, January 29, marks the 70th anniversary of the birth of the famous Armenian opera singer (tenor) and director, People's Artist of the Armenian SSR, Honored Artist of the Lithuanian SSR Gegham Grigoryan.

On the occasion of the anniversary, the RA ESCS Minister Vahram Dumanyan, Deputy Minister Ara Khzmalyan, together with representatives of the intellectuals, art critics, and music lovers visited the Komitas Pantheon and paid tribute to the memory of the famous artist.

Vahram Dumanyan, along with the maestro's family members, the department's employees, fans of Grigoryan's art and colleagues laid flowers at the grave of Gegham Grigoryan. The Minister talked with the singer's wife and son, referred to the life and the activities of the artist.

“We very often consider and proclaim great those people who are known and valuable to us - Armenians, but Gegham Grigoryan is indeed a star in the European sense. He performed on the leading stages of the world and disseminated Pan-European values with his Armenian surname. He was an exceptional artist, a great ambassador of national pride and dignity, whose value is measured by the international scope of opera art. And today we are experiencing a great pain that such a cheerful, friendly person left us untimely," - noted the RA ESCS Deputy Minister Ara Khzmalyan speaking about the artist, and added that the successors of the great star Gegham Grigoryan are his descendants with their life and activities.

Gegham Grigoryan has performed in many major opera houses and concert halls around the world. The maestro created his own values in opera art and for almost half a century presented the best arias and refined performances to the world. The name of Gegham Grigoryan is included in the list of the top 40 tenors of the 20th century. He had his own prescription to make the planet better: "People should be connected to theater and art. A person who loves classical music will not cut down a tree, a person who listens to opera will not kill or rob."

It should also be noted that the Opera and Ballet Theater of Armenia will celebrate the anniversary of the celebrated artist throughout the year. The start of the anniversary celebrations will be launched on January 31 with the opera performance of A. Tigranyan "Anush" staged by Gegham Grigoryan.