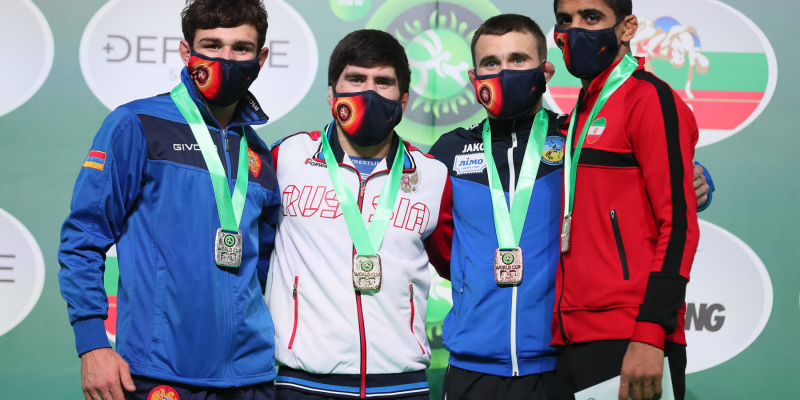 In the duel for the gold medal Harutyunyan with the score of 0:10, lost to two-time world champion Zaur Uguev (Russia).

Arman Andreasyan started the fight from the qualifying stage, defeating the representative of Moldova Valentin Borzin with a score of 4:2. In the 1/8 final Andreasyan lost to Magomedmurad Gadzhiev, a Polish representative scoring, 1:4; and as a result of his entry into the final, he had the opportunity to continue the fight for the bronze medal. In the consolation matches, the Armenian wrestler won confident victories with a score of 10:0 and 7:0 over Slovakia's Daniel Chomanik and Hungary's Daniel Antal. In the fight for the bronze medal, Arman Andreasyan's opponent Chermen Vali (Russia) refused to fight due to a leg injury.

Today Vazgen Tevanyan (65 kg) will fight for the gold medal of the World Cup. His opponent is the representative of Hungary Ismail Musukaev.

Razmik Papikyan (61 kg) will hold a consolation fight for the bronze medal against Volodymyr Burukov from Ukraine.

The Armenian freestyle wrestling team participated in the World Cup with 8 wrestlers. Hrayr Alikhanyan (74 kg), Arman Avagyan (79 kg), Hovhannes Mkhitaryan (86 kg) and Hovhannes Maghakyan (125 kg) were left out of the fight for medal.

Note that earlier, among the Greco-Roman wrestlers at the World Cup, Malkhas Amoyan (72 kg) became the silver medalist, and Slavik Galstyan (63 kg) won the bronze medal.