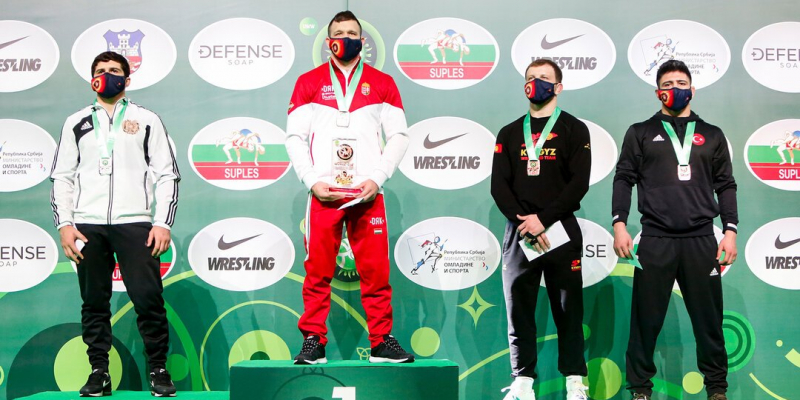 Armenian Greco-Roman wrestling team has already won 2 medals at Individual World Cup in Belgrade, Serbia. On the second day of the competition, Malkhas Amoyan (72 kg) won a silver medal, and Slavik Galstyan (67 kg) won a bronze.
The decisive fight between Malkhas Amoyan and the representative of Hungary Balint Korpashi ended with a score of 1:1. The Hungarian wrestler was awarded the victory as a result of winning the last point. Note that the champion of the World and European Youth Championships did not concede a single point to his opponents before the final․ In the opening match, Amoyan-defeated Serbian Aleksander Maksimovich with a score 6:0; in the quarterfinals he defeated Moldova's Valentin Petic with a score of 12:0. In the match for a ticket to the finals, he defeated Turk Cengiz Arslan with a score of 7:0.
Slavik Galstyan in the fight for the third place defeated the representative of Ukraine Artur Politaev. In the first round, Galstyan lost with a score of 0:4, but in the second round he scored 2 points, then finished the match ahead of schedule with touche. Slavik Galstyan started the fight from the 1/8 final defeating the representative of Chile Cristobal Nunez with the score 7:0. In the quarterfinals, as a result of controversial referee decisions, Galstyan lost to the representative of Azerbaijan, Islambek Dadov, scoring 4:7. The latter reached the final, as a result of which the Armenian wrestler got an opportunity to continue the fight. Before the medal match with Politaev, Galstyan won the consolation match with a score of 9:0 against Peruvian Nilton Soto.
On the second day of the competition, Karapet Chalyan (77 kg) had the opportunity to win a bronze medal, but he lost to Serbian Victor Nemes, scoring 1:4. Chalyan started the fight from the qualification stage, defeating Ivan Nilipjuk from Poland with a score of 4:0. In the 1/4 final, the Armenian wrestler defeated Italian Matteo Mafezoli with a score of 4:2, and in the quarterfinals lost to Russian Roman Vlasov with a score of 1:3. As the latter reached the Finals, Chalian took part in a consolation match and defeated German representative Pascal Eisele with a score of 4:1.
On November 14, the third day of the competition, the representatives from the Armenian team David Ovasapyan and Arthur Aleksanyan have a chance to win a bronze medal. Five-time Olympic and European Games champion, European champion and three-time World champion Artur Aleksanyan in the qualification round of the 97 kg weight category fought with the representative of Russia Musa Yevloev and lost as a result of controversial referee decisions with a score of 1:5. The 2019 World champion Yevloev reached the final, which gave Artur Aleksanyan the opportunity to hold a consolation match and compete for the bronze medal.
Davit Ovasapyan (130 kg) started the fight by defeating Serbian Boban Zivanovic scoring 3:1 in the qualifying round. Ovasapyan finished quarterfinals with Chilean Yasmani Acosta with a score of 1:1. With the advantage of the last point, the victory was awarded to the Armenian wrestler. In the semifinals, Ovasapyan's opponent was the representative of Russia Sergey Semyonov, to whom the Armenian wrestler lost with a score of 0:8. Tonight, Ovasapyan will fight for the bronze medal with the representative of Ukraine Nikolay Kuchmi.
In addition, Rudik Mkrtchyan (55 kg), Armen Melikyan (60 kg), reigning European champion Gevorg Gharibyan (63 kg), Ruben Gharibyan (82 kg) and Artur Shahinyan (87 kg) were left out of the medal fight of the World Cup Individual Tournament.