Actors of 6 theaters in one performance: the premiere of “Striking Clock” will held soon
Culture 27 February 2020 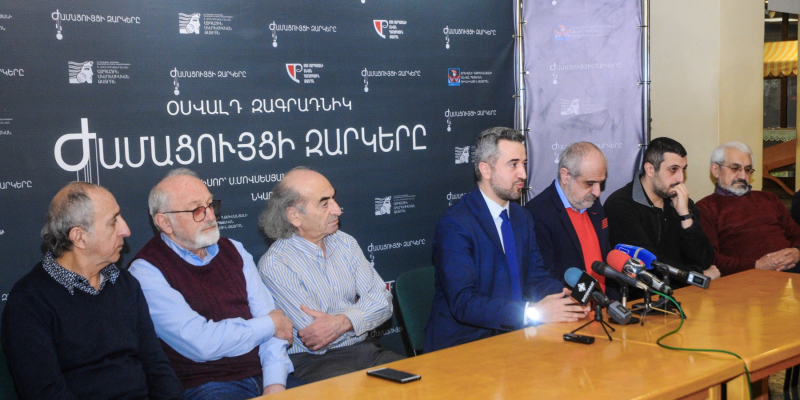 Leading actors of 6 theaters in one play: the play “Striking Clock”, based on the work of Oswald Zahradnik. will premiere on March 3 and 4 at H. Tumanyan State Puppet Theater.

The favorite actors will perform in the play “Striking Clock” in three theaters of the capital: H. Tumanyan State Puppet Theater, G. Sundukyan National Academic Theater and “Hamazgain” Theater after Sos Sargsyan. The director of the performance is Samson Movsesyan, the assistant director - Hrachya Gumbalyan, and the decoration is by Karine Babayan.

Emphasizing the initiative, the RA Deputy Minister of Education, Science, Culture and Sports Ara Khzmalyan noted that this performance is a tribute to our famous artists who have dedicated their lives to the profession of an actor and turned it into a mission, and their contribution to the development of theater culture is undeniable.

A. Khzmalyan emphasized the format of the play, adding that the most dangerous for a creative group, an artist, a creative person is a stable life and a monotonous environment, an unchanging creative composition, dependence on one director and author.

“This format is designed to prove that the logic of creative relations really needs to change, and this novelty will benefit both actors and the public,” stated the Deputy Minister, adding that the performance, created due to the cooperation of actors from different theaters, will be staged not only in the puppet theater but also on different stages. According to A. Khzmalyan, after the premiere, it is necessary to think of staging the performance in the regions of the country.

Artistic Director and Head of the State Puppet Theater named after H. Tumanyan Ruben Babayan thanked everyone who responded to the idea. “A brilliant ensemble and a very modern idea. Remarkable actors from 6 theaters gathered in one play. Today, when all sorts of cultural boundaries in the world are disappearing, it’s time for us to eliminate the watersheds and borders of the theatrical sphere,” stated R. Babayan. He expressed hope that this performance will be ongoing and will become an excellent school for young actors in the future.