The development of sport is a state priority: Top 10 athletes of the year are awarded
Sports 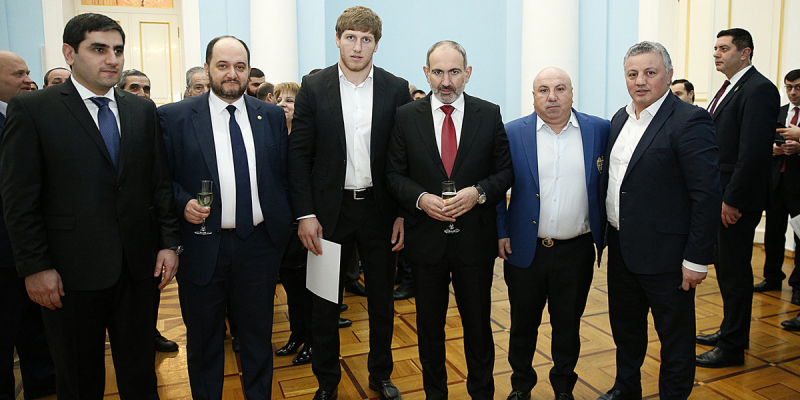 The RA Prime Minister Nikol Pashinyan received the winners of the contest “Top 10 Athletes of the Year” 2019 of the Ministry of Education, Science, Culture, and Sports. The awarding ceremony was also attended by RA Minister of Education, Science, Culture and Sports Arayik Harutyunyan, as well as prominent representatives of Armenian sports. Welcoming the participants, the Prime Minister Nikol Pashinyan noted that this event is the practical launch of the statement that sports development is of strategic importance for the Republic of Armenia:

“I attach great importance to the development of big sports in Armenia, because I believe that the achievements of our athletes in the international arena are not only the personal success of coaches and sports schools, but also enhance the confidence of citizens of the Republic of Armenia. This is our core attitude to our sport and sporting success. We have a political decision that we should support our sport and our athletes and do everything possible to contribute to the development of sports in Armenia.” stated the Prime Minister Nikol Pashinyan emphasizing that the services provided by athletes to their homeland are indispensable and very important.

Addressing the participants, the RA Minister of Education, Science, Culture and Sports Arayik Harutyunyan stated that sports development is one of the main priorities.

“Sport is not only health, education, a major opportunity for economic development, but also an important guarantee of tolerance and the formation of a new value system in society. The one who is strong in the body, is strong in spirit, and therefore is tolerant, generous and forgiving. I am glad that this Olympic year we are holding an awarding and honoring ceremony for our sportsmen. This initiative is another evidence that the State pays more attention to sports, our athletes, their efforts, the work of coaches, the effective work of the federations. This event is not just money awarding ceremony. First of all, this is the attitude of the State to the efforts, work accomplished and, therefore, to activities aimed at strengthening our State.” stated the Minister, noting that from this year the monthly payments of the winners of the Olympic Games and World Championships will double.

Henceforth the winners of the "Top 10 Athletes of the Year" competition of the RA Ministry of Education, Science, Culture, and Sports will be awarded 5 million AMD. Previously, there was no budget incentive to award the top10 athletes of Armenia, and this year 50 million drams were allocated to the RA MoESCS from the state budget reserve fund.