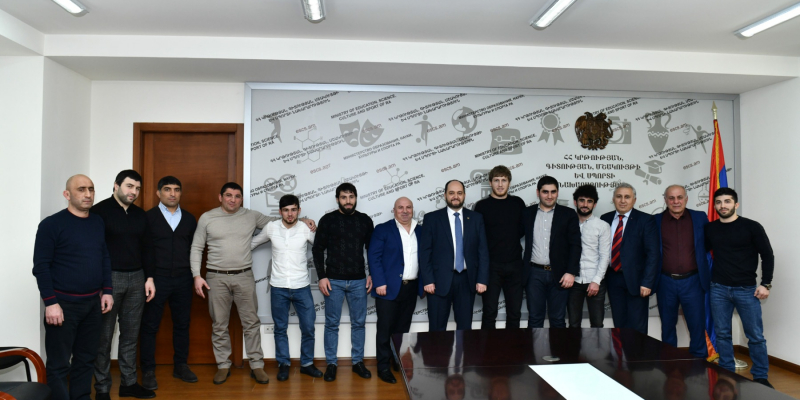 RA Minister of Education, Science, Culture and Sports Arayik Harutyunyan received today the medalists of the European Wrestling Championship and representatives of the Wrestling Federation of Armenia. The meeting was also attended by the Deputy Minister Grisha Tamrazyan.

Minister A. Harutyunyan congratulated and thanked the winners for the feeling of pride of victory.

“Congratulations to all of us with the medals won at the European Championships. This result is very encouraging before the Olympic Games. I am sure that we will have greater success in the near future. The year is Olympic, so we tune in for the victory.”, stated Minister Arayik Harutyunyan.

He inquired about the course of training and competitions and existing issues, assuring that the RA Ministry of Education, Science, Culture, and Sports will undertake all necessary steps to bring the development of wrestling to a higher level in the country. “The Ministry will not interfere in the internal activities of the Federation, only to support and promote good results,” concluded A. Harutyunyan.

The attendees also raised their concerns regarding the preparations for the Tokyo Olympics. A. Harutyunyan promised to assist the athletes in every way and increase the state support every year.

The athletes thanked the Minister for the reception and noted that they will continue doing their best to hold the honor of the Armenian sport at a high level.