ON THE OCCASION OF THE NEW YEAR, GIVE TICKETS TO YOUR FRIENDS: ARAYIK HARUTYUNYAN'S APPEAL TO THE STUDENTS
Youth Education 24 December 2019 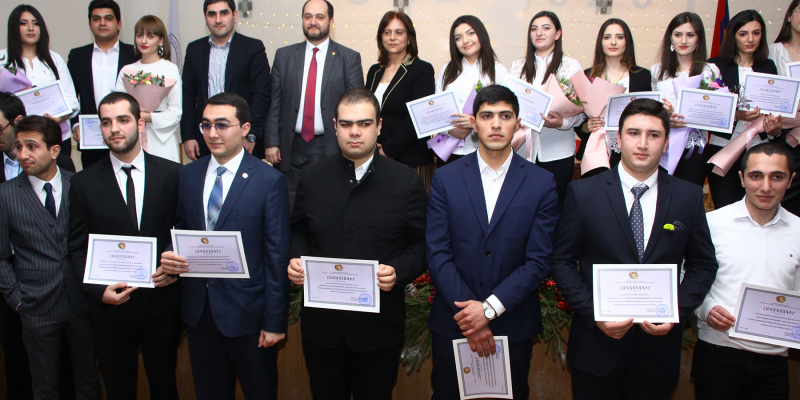 The award ceremony of the winners of "The Best Student" competition for 2019, was held at the State Socio-Linguistic University after V. Brusov.

According to the decree of RA Minister of Education, Science, Culture and Sports, the students with high academic performance, who became the winners of the Republican Competition “The Best Student”, were awarded with certificates and nominal scholarships, provided from the State Budget of the Republic of Armenia. RA Minister of Education, Science, Culture and Sports Arayik Harutyunyan handed the awards to the winners. Congratulating the winners, the Minister noted that students continue to be one of the most important partners of the Ministry in the field of education policymaking. “We will need you more for the coming year as discussions on the draft of the law on “Higher Education and Science” will continue with the active participation of students in the nearest future”- stated the Minister. Arayik Harutyunyan also congratulated students on the coming New Year, emphasizing that the Ministry of Education, Science, Culture, and Sports is making efforts to create a new culture of celebrating the New Year with cultural spirit. “Help us share the idea. We offer to make the holiday full by visiting cultural institutions: theaters and museums that will work during the holidays. On the occasion of the New Year give tickets to your friends, professors, and rectors; and let them give you too.” - exhorted the Minister in conclusion.

It should be noted that the rectors of RA HEIs and Deputy Coordinating Minister G. Tamrazyan attended the summoning ceremony of the “The Best Student” Competition. The competition was held in two stages: inter-university and republican. Upon completion of the introductory stage, the universities have submitted to the Ministry of Education, Science, Culture, and Sports the documents of the winners for the first stage of the competition till October 20.

The Competition Committee, approved by the Minister's decree on December 2, summarized the results of the republican phase. 38 undergraduate and postgraduate students from 15 HEIs in Armenia became the winners of the Republican Competition “The Best Student” in seven fields (Natural Sciences, Social Sciences, Armenology, Humanities, Medicine, Engineering, Culture, and Sports