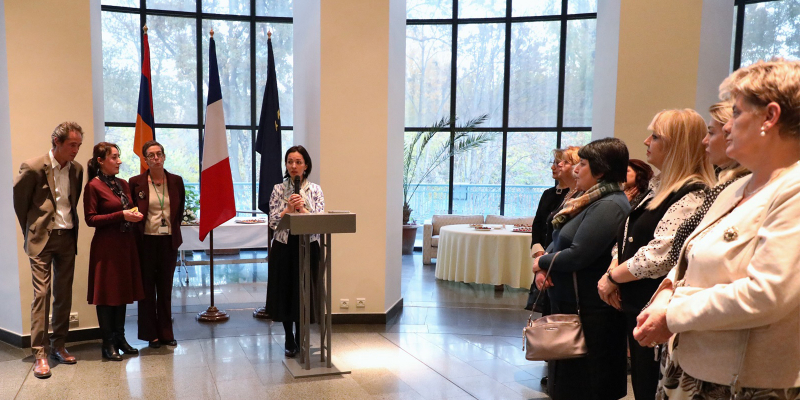 The Ambassador also expressed gratitude to the teachers for their daily efforts to teach French to Armenian schoolchildren and promote the French language. Anne Louyot highlighted the importance of the opening of the French Institute in Yerevan in January this year, which will become another center for the dissemination of the French language, joining the ranks of the French University in Armenia, the Anatole France French Educational Complex and other French-speaking centers. ESCS Deputy Minister Zhanna Andreasyan also congratulated the French language teachers, emphasizing their role in the education system of Armenia:

“The International French Teachers’ Day is important primarily because it emphasizes the special role of the teacher, highlighting the paramount importance of pedagogical activities. Thank you for the daily difficult and sometimes seemingly unappreciated work you do, which in fact is truly appreciated. I also highly emphasize that we are talking about French teachers. This is a chance where you feel part of a larger community, thus ensuring the contribution of our teachers to this global community,” said Zhanna Andreasyan in her speech to the teachers attending the event.

According to the ESCS Deputy Minister, education knows no borders, and we have an additional obligation to first transform education into a global process, and then to enhance the language skills of children, because today it has become one of the important criteria of literacy, ceasing to be only a separate profession or direction: “Language literacy is already one of the minimum abilities and skills required by each of us.”

“I am sure that the reforms will also contribute to strengthening the knowledge of the French language, which we do not consider only as knowledge of the language. It is also a values education, aesthetic and cultural education, and an opportunity to communicate with other realities, thereby developing, enriching and contributing to the development of our country,” noted the Deputy Minister.

Zhanna Andreasyan also underlined the importance of cooperation in the field of vocational education and training, both in terms of learning French and in terms of experience in implementing French models. In this context, she, in particular, touched upon the recently opened Patrick Devedjian Regional College in the Tavush region, where education is realized according to the French model.