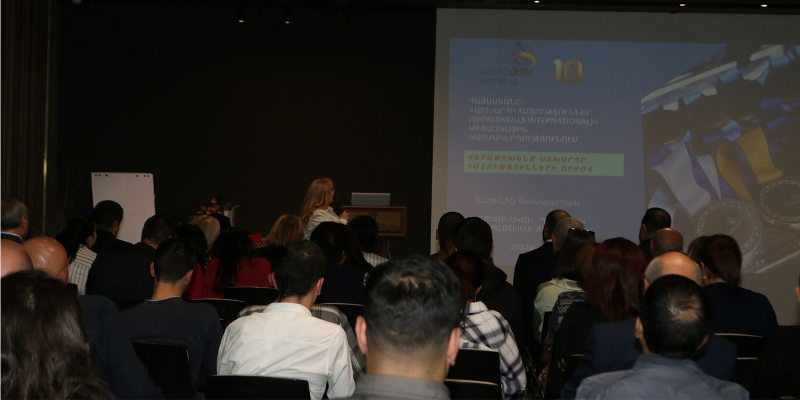 The winners of the “WorldSkills Armenia” national competition participated in the 46th "WorldSkills” International Competition in the specialties “Cooking”, “Mechatronics”, and “Web technologies”.

Armenia has become a full member of the “WorldSkills” International Organization since 2012, where our country is represented by the National Center for Vocational Education and Training Development (NCVETD).

This year marks the 10th anniversary of Armenia's membership. The national team of Armenia has participated in the skills competition for the 4th time. The participants are students or graduates of institutions of primary (handicraft) vocational and secondary vocational education, who present their skills on a global platform that unites youth from 85 member states.

ESCS Deputy Minister Zhanna Andreasyan participated in the event of summarizing the results of the "World Skills" International Competition and the ceremony of awarding the medal in the category “Best of Nation”.

Congratulating all the participants of the competition, the Deputy Minister noted that organizing such events is an additional chance to show what important activities are carried out by primary and secondary vocational educational institutions.

According to Zhanna Andreasyan, the international competition is also an important review in terms of highlighting the achievements of the sector, including in the international domain making Armenia's results comparable with other countries.

“I am sure that after the “World Skills” international competition our students will continue to learn and master with greater enthusiasm. Such competitions prove how important work-based learning is, as well as the outcomes achieved during short-term programs. I would also like to inform you that at the plenary session of the National Assembly the draft on amendments and additions to the law “On Primary Vocational (Handicraft) and Secondary Vocational Education" was discussed and adopted in the first reading, the objective of which is to implement a number of new procedures in the field, aimed at an interconnected mechanism of professional development and remuneration of employees of vocational schools and colleges,” noted Zhanna Andreasyan thanking the teachers and students of all educational institutions for the great work.

In turn, Tatevik Gasparyan, director of the National Center for Vocational Education and Training Development, the official Armenian delegate of the "World Skills" Organization noted that the main goal and mission of the “World Skills” International Organization is to refine the world through skills: “The primary goal of this competition is to support and present qualified specialists to the world, showing how important skills are for economic growth and personal success. This Organization is the best example of mutually beneficial and long-standing cooperation between the business world and government agencies, in particular in the field of education.”

During the event, “WorldSkills Armenia” awarded certificates and letters of gratitude to the experts and sponsors of the “World Skills” International Competitions of previous years, and the participants of the national team of “Mechatronics” Gor Dilanyan and Hovhannes Tevanyan were awarded a medal by the "World Skills" organization in the nomination of “Best of Nation”.

ESCS Deputy Minister Zhanna Andreasyan awarded the medal to the participants. The Deputy Minister was also awarded a special certificate of appreciation from “WorldSkills Armenia” for her valuable contribution to the promotion of the "World Skills" movement.