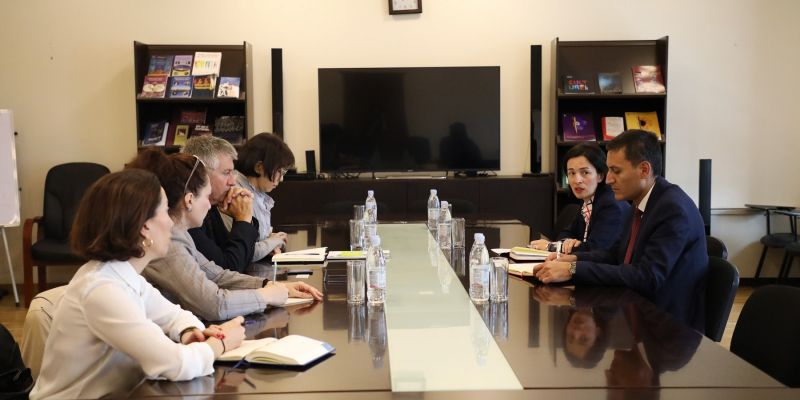 During the meeting, the possible assistance of the Asian Development Bank to the education reform processes in Armenia was discussed.

Welcoming those present, Deputy Minister Arthur Martirosyan noted that the Armenian Office of the Asian Development Bank is one of the important partners of the ESCS Ministry, with which various educational programs have been implemented over the years. Arthur Martirosyan highlighted the importance of the programs implemented with the Asian Development Bank, emphasizing the distance learning platform developed with the assistance of the ADB. The Deputy Minister thanked the Bank for assistance in the development of a number of legal documents in the field of education of the Republic of Armenia.

In turn, ESCS Deputy Minister Zhanna Andreasyan touched upon the avenues for cooperation with the Bank and the best experience shared. According to her, the RA Government has set quite ambitious goals in the field of school construction, in particular, in the direction of the construction and reconstruction of 300 schools. Zhanna Andreasyan was pleased to state that the “Seismic Safety of Schools” program implemented by the ADB is a contribution to the realization of these goals. In this context, the Deputy Minister informed that at the last session of the RA Government, 10 schools included in the mentioned program were provided with property to make the educational environment more complete.

Zhanna Andreasyan also underlined the importance of the distance learning platform developed with the assistance of the ADB, emphasizing that it not only provided great assistance in organizing the educational process during the pandemic, but is also aimed at finding new solutions using modern technologies in the field of education.

The Deputy Ministers presented to the Delegation of the Asian Development Bank the process of implementing the standards of STEM subjects, as well as the key directions of the "RA State Program for the Development of Education until 2030”.

The representatives of the Asian Development Bank expressed willingness to continue the assistance, which may also include the development of human resources. At the meeting, the sides agreed that the ADB will study the "RA State Program for the Development of Education until 2030" and the range of activities deriving from it for the implementation of possible support programs. It was noted that the ADB will come up with a five-year plan, which may also include education support programs to achieve the goals outlined in the state education development program.

Other issues regarding the further cooperation between the ESCS Ministry and the Asian Development Bank were considered during the meeting.