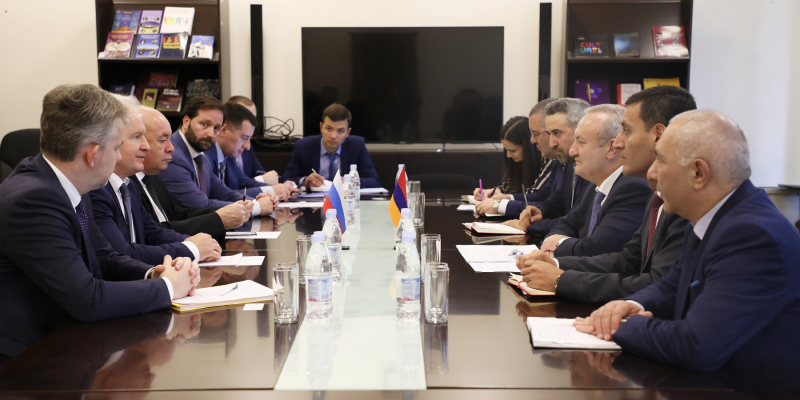 RA Minister of Education, Science, Culture and Sports Vahram Dumanyan received today the Special Representative of the President of the Russian Federation on International Cultural Cooperation Mikhail Shvydkoy and Chief of the Presidential Directorate for Interregional Relations and Cultural Contacts with Foreign Countries Igor Maslov.

Welcoming the visit of the delegation to the RA ESCS Ministry, Vahram Dumanyan touched upon the programs “Armenian Culture Days in Russia” and “Russian Spiritual Culture Days in Armenia”. It was noted that within the framework of the 30th anniversary of the establishment of diplomatic relations between the Republic of Armenia and the Russian Federation, Armenian Culture Days were held in Russia from June 10 - 13, 2022. The events were held in Moscow and Kislovodsk. The Armenian National Philharmonic Orchestra and the Komitas National Quartet performed concerts as part of Culture Days. The “Russian Spiritual Culture Days in Armenia” program is scheduled for 6-7 October 2022.

The parties also touched upon cooperation between the two countries in the film industry. Within the framework of the 100th anniversary of Armenian cinema, which is scheduled for 2023 and is included in the UNESCO calendar of anniversaries of eminent personalities and important events, the Russian side expressed willingness to assist in the organization of the digitization of Armenian films shot during the USSR and currently stored in the archive of the State Film Fund of the Russian Federation. As part of the anniversary events, it was also suggested to consider the possibility of organizing a joint screening of “Hayfilm” studio films at the Illusion Cinema.

Other issues of bilateral interest were also discussed during the meeting.