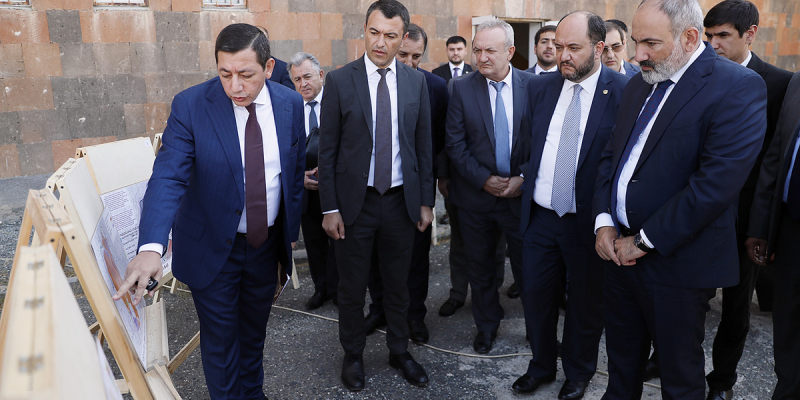 Prime Minister Nikol Pashinyan visited the Institute for Physical Research of the RA National Academy of Sciences of Armenia in Ashtarak, Aragatsotn region, where the concept of the academic City was discussed.

The Head of the Government was accompanied by Chief of Staff of the Prime Minister Arayik Harutyunyan, Minister of Education, Science, Culture and Sports Vahram Dumanyan, head of the Cadastre Committee Suren Tovmasyan and other representatives of relevant departments.

It is planned to locate the academic City in the territory of the Institute for Physical Research and Institute of Radio-physics and Electronics of the National Academy of Sciences of the Republic of Armenia and other adjacent areas.

The academic City will host up to 8 universities with all the infrastructure. A preliminary city plan has already been developed, according to which all the necessary conditions for students and teaching staff will be created in the academic City. In addition to universities, residential areas, research centers, sports infrastructure, a park, and an amphitheater will be founded in the city.

Prime Minister Pashinyan highlighted the importance of developing an action plan with a definite schedule. The Head of the Government underlined the importance of providing the city with all necessary infrastructures, including a transport network. According to the Prime Minister, the foundation of the academic city will also contribute to the development of Aragatsotn and adjacent regions, the formation of educational and research clusters. Nikol Pashinyan noted that the program is among the Government's priorities, and in the context of its successful implementation, he gave a number of instructions to the heads of the responsible departments.