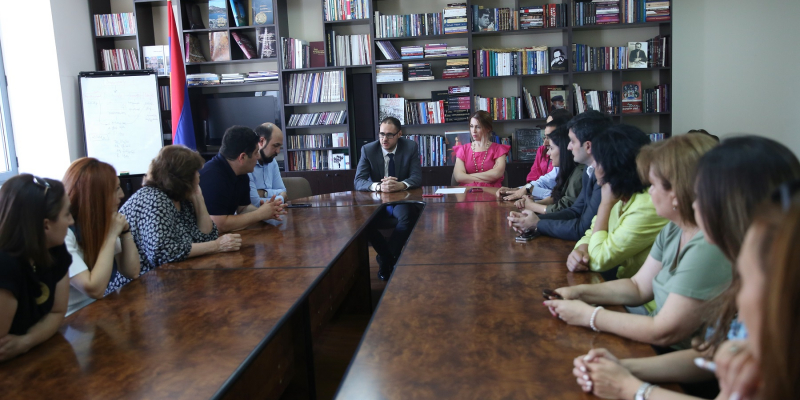 The 26th Assembly of the International Council of Museums (ICOM) was held in Prague, the capital of the Czech Republic, under the motto "The Power of Museums", which was also attended by the delegation of Armenia on August 20-28.

The possibility of holding the assembly in Armenia in 2028 was also considered, expecting sponsorship and assistance from the State. Deputy Minister Alfred Kocharyan noted that the State is sparing no effort to advance the activity of the sector, encourage workers, as well as to provide more funding in all possible means.

The Armenian representatives of the Assembly reported that at the joint meeting organized by the ICOM International Committees on Risk Management and Military Museums, the Chairman of the ICOM of Azerbaijan presented an anti-Armenian report, in response to which the ICOM Armenian Chairman Hayk Mkrtchyan handed the organizing committees a letter of complaint prepared by the delegates of Armenia and agreed upon with the RA Ministry of Foreign Affairs, stressing that the professional platform should not be turned into a political. A report was also presented on the war crimes committed by the Azerbaijani armed forces in Artsakh on the destruction of cultural heritage.

ICOM Assemblies are held every three years and are considered the most important professional event in the field of museums. General Assemblies are a unique opportunity to exchange experience, discuss innovative ideas and prospects in the field, as well as establish new ties. The Assembly was attended by about 3,000 representatives of the museum sector from 115 countries.

In this regard, the Armenian representatives of the Assembly positively assessed the visit since a number of arrangements were made.

During the Assembly, ICOM approved the new definition of the term “museum”, for which the Armenian delegates also voted.