“Civic Education and Participation” program is discussed
Education 12 May 2022 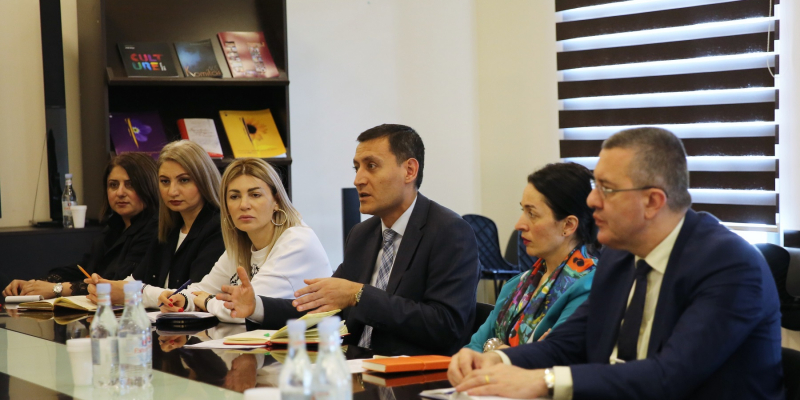 RA ESCS Deputy Ministers Zhanna Andreasyan and Arthur Martirosyan held a working meeting with the officials of the “Civic Education and Participation” program launched with the support of the United States Agency for International Development (USAID).

The program has two components: improving the civic participation capacity of schoolchildren through formal education; and secondly, improving the environment that fosters youth civic engagement.

Representatives of the company “PH International” briefly presented the main objectives of the program and the proposed activities. It was noted that the first component - improving the civic participation capacity of schoolchildren through formal education, is in line with the current reforms of general education in Armenia and is associated with improving the teaching of the subject “Social Studies”. Activities aimed at improving formal civic education through non-formal education will be considered and developed in cooperation with the “NCEDI” Foundation and the “NCET”, giving the priority to project-based learning. It was also proposed to develop the activities of the Student Council under the ESCS Minister, contributing to the institutional formation.

“The field of general education is currently at the stage of active reforms. In particular, a new standard of general education is being introduced, which this year has been piloted in the schools of Tavush region. The activities proposed by the program can contribute to the efficiency of localization and implementation of the standard,” noted ESCS Deputy Minister Zhanna Andreasyan stressing that it is extremely important to assess the efficiency and impact of the components of the program.

The second component of the program - improving the environment that fosters youth civic engagement, is aimed at implementing informal educational programs for young people over the age of 18․ This component plans to organize summer schools, annual EXPO competitions, and other events for young people.

Deputy Minister Arthur Martirosyan also suggested considering the establishment of infrastructures in the consolidated communities of the regions, in particular, the opening of youth centers and the implementation of informal educational programs in them.

“It is very important that the activities implemented by the support programs of international partners are in line with the State policy and contribute to the development of opportunities and capacities of the youth, especially those living in the regions,” noted Arthur Martirosyan.During the meeting, the phased tasks of the program implementation and the work and organizational issues deriving from them were considered.