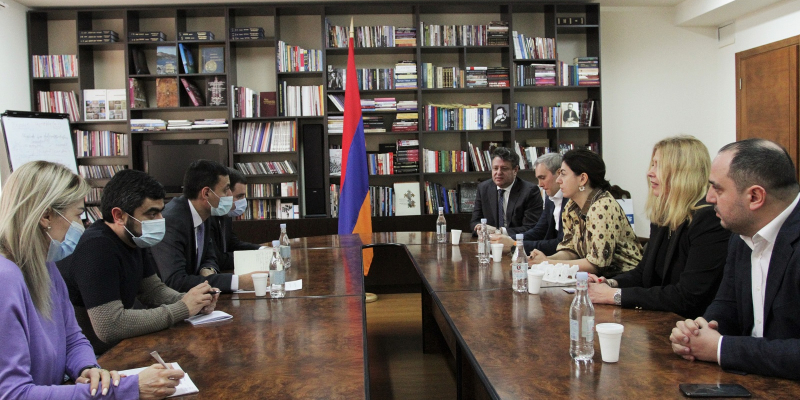 Deputy Ministers of Education, Science, Culture, and Sports Arthur Martirosyan and Karen Trchunyan held a working meeting with the officials responsible for the advancement of additive education of the Rostec and Rosatom Russian leading corporations in the field of 3D. The meeting was attended by the Chairman of the RA Science Committee Sargis Hayotsyan.

The Russian Delegation was represented by Director-General of Rostec’s Center for Additive Technologies Vladislav Kochkurov; Director-General of the Center for RusAT Additive Technologies operating under the ROSATOM Corporation, Mikhail Turundaev; Deputy Director for Development of the "CITO" Company of the Ministry of Industry and Trade of the Russian Federation Sergey Bushnev; Co-founder of the Citymobil Center Hovhannes Arakelyan; Director of the Research Institute for Applied Materials, Concern VKO “Almaz – Antey” JSC Lyubov Nefedova; Founder and CEO at SIU SYSTEM, CJSC Ashkhen Ovsepyan.

Welcoming the guests, RA ESCS Deputy Minister Arthur Martirosyan noted that Armenia has a wide range of cooperation with the Russian side in the fields of education and science. “In particular, to advance the cooperation in the technological education development, it is necessary to define the issues, setting more targeted and definite goals. I am sure that the willingness to strengthen the cooperation is mutual,” noted the Deputy Minister.

Deputy Minister Karen Trchunyan, highlighting the collaboration in the fields of higher education and science, gave the priority to the implementation of bilateral programs aimed at the development of 3D technological education. He noted that in this regard, the preference for natural sciences is shaped from school, which is considered the basis for the development of industry, and the science of 3D technologies, is of paramount importance. In this regard, Deputy Minister Arthur Martirosyan said that according to the current Armenian-Russian interstate program, up to 200 young Armenians annually receive education in higher educational institutions of the Russian Federation, many of whom give the preference to the specialties of natural sciences. In this context, according to the Deputy Minister, the inclusion of specialties of additive technologies in the list can also be considered.

The representatives of the Russian side presented the priority of the advancement of technological education, noting that they also have a great demand for staff in this field, given that the 3D technology industry is now being implemented in all its capabilities in almost every field, besides education and science, including healthcare, as well as economics and industry. They also noted that a piloting 3D technology education program is being implemented in secondary schools in Sochi, which may be useful for partner countries.

During the meeting, issues related to a wide range of cooperation development within the framework of the introduction of additive technologies in Armenia were also discussed and outlined․